U.K. Says Iran Seized 2 Of Its Oil Tankers In The Strait Of Hormuz 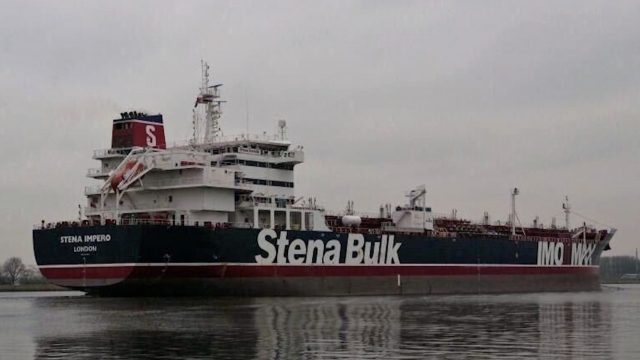 The U.K. says Iran seized two of its oil tankers in the Strait of Hormuz on Friday, including one that flew a British flag.

Iran's Islamic Revolutionary Guard Corps first reported it had captured a British-flagged vessel. The guard corps said in a statement that the tanker, named Stena Impero, was confiscated "at the request of Hormozgan Ports and Maritime Organization ... for failing to respect international maritime rules."

It was also reported that Iran seized a second tanker Friday, the Liberian-flagged MV Mesdar. But that's disputed by what Reuters calls a "semi-official" local news outlet. Citing military sources, that outlet says the Mesdar was issued a safety warning and allowed to continue its course.

British Foreign Secretary Jeremy Hunt said he'd attend an emergency meeting to see what the U.K. can do to get its two vessels back. He said no British citizens were believed to be aboard the ships.

Meanwhile, the U.S. took precautionary measures Friday to protect one of its own ships in the same area. The U.S. believes the captures were preplanned, and President Donald Trump told reporters he'll talk to the U.K. about the tankers.

Last week, Iran tried and failed to seize a different British oil tanker, the British Heritage, in the Persian Gulf. The U.K. also seized an Iranian tanker earlier this month.