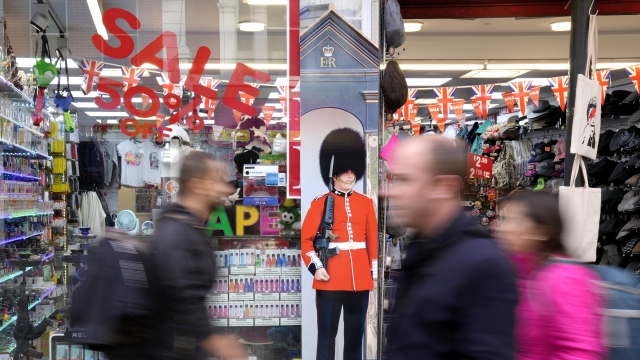 Higher prices for food and energy drove Britain's inflation rate to the highest since October 1981.

Britain's inflation rate rose to a 41-year high in October, fueling demands for the government to do more to ease the nation's cost-of-living crisis when it releases new tax and spending plans Thursday.

Consumer prices jumped 11.1% in the 12 months through October, compared with 10.1% in September, the Office for National Statistics said Wednesday. The new figure exceeded economists' expectations of 10.7%.

Higher prices for food and energy drove Britain's inflation rate to the highest since October 1981, the ONS said. It exceeds the record 10.7% inflation seen last month in the 19 European countries using the euro currency and the U.S. rate of 7.7%, which slowed in October.

The figures come a day before Treasury chief Jeremy Hunt is scheduled to unveil a new budget amid growing calls for higher wages, increased benefits and more spending on health and education as raging inflation erodes the spending power of people across the country.

"We cannot have long-term, sustainable growth with high inflation," Hunt said after the inflation figures were released. "Tomorrow I will set out a plan to get debt falling, deliver stability, and drive down inflation while protecting the most vulnerable."

Governments and central banks around the world are struggling to contain widespread inflation that began to accelerate as the global economy recovered from the coronavirus pandemic, then soared after Russia's invasion of Ukraine restricted supplies of natural gas, oil, grain and cooking oil. While there is little policymakers can do to combat such external shocks, those price increases are becoming embedded as producers pass their costs on to consumers and workers demand higher wages, posing a longer term threat to economic growth.

The Bank of England earlier this month forecast that U.K. inflation would peak at around 11% in the fourth quarter and begin falling early next year. The bank has approved eight consecutive interest rate increases, pushing its key rate to 3%, as policymakers try to bring inflation back in line with their 2% target.

Hunt said the government had a duty to help the Bank of England control inflation and act responsibly with the nation's finances. The comment was a stark contrast to the message from Truss, who said it was the government's responsibility to spur growth, setting up a tug-of-war between a government with its foot on the economic gas pedal and a central bank attempting to cool the economy with higher borrowing costs.

The European and U.S. central banks also have been hiking rates aggressively, though the Federal Reserve is expected to temper them going forward after inflation slowed to 7.7% last month from 8.2% in September.

But U.K. inflation has yet to peak.

Food prices rose 16.4% in the 12 months through October — the biggest jump since September 1977 — as supermarkets passed on rising costs to consumers, the statistic office said. The cost of electricity and natural gas jumped 24%, even after the government capped energy prices to shield consumers from the impact of the energy crisis tied to the war in Ukraine.

Shona Lowe, a financial planning expert at the fund manager Abrdn, said that understandably, inflation was a top concern for most households.

"Unfortunately, the U.K. is not yet following in the footsteps of the U.S. when it comes to inflation easing," she said. "In fact, the Bank of England announced last week that it does not expect inflation to fall until the middle of next year, so consumers need to prepare for further pressure on their finances."