U.K. House Of Commons Speaker John Bercow To Step Down 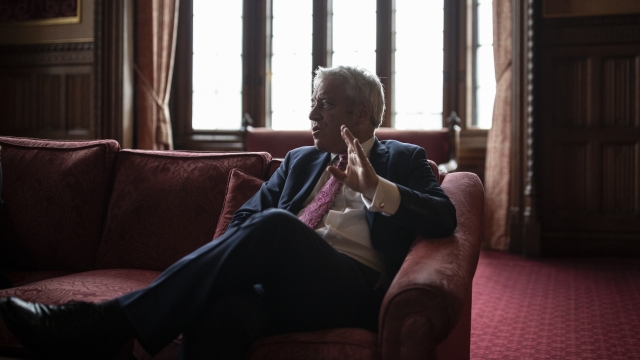 SMS
U.K. House Of Commons Speaker John Bercow To Step Down
By Ahmed Jawadi
By Ahmed Jawadi
September 9, 2019
​Bercow – who's served in the position since 2009 – said he'll leave his post by Oct. 31, the day the country is set to leave the EU.
SHOW TRANSCRIPT

U.K. House of Commons Speaker John Bercow has announced he will step down from his position.

Bercow announced his decision to members of parliament on Monday, saying he'd promised his family after being elected as speaker in 2017 that it would be his last term. Bercow – who's served in the position since 2009 – said he'll leave his post by Oct. 31, the day the country is set to leave the EU.

"This has been, let me put it explicitly, the greatest privilege and honor of my professional life, for which I will be eternally grateful," Bercow said. "I wish my successor in the chair the very best fortune in standing up for the rights of honorable and right-honorable members individually and for parliament institutionally as the speaker of the House of Commons. Thank you."

Bercow said he would leave the position sooner if the House of Commons approved Prime Minister Boris Johnson's plan to hold an early general election. Johnson's latest attempt only managed to get 293 votes in favor of the motion, falling well short of the two-thirds support needed to trigger a snap election.

Once Bercow leaves his post, members of parliament will vote via a secret ballot on who will take his place. To be in the running, candidates need to be nominated by at least twelve members, with at least three of them being from a political party different to that of the candidate. Candidates would then need to secure at least 50% of the votes to become speaker. But if no candidate manages to do so, then the candidate with the fewest votes, as well as those with less than 5%, are eliminated. MPs would then vote again on the reduced slate of candidates and keep doing so until one candidate receives more than half the votes.

Multiple candidates have already announced they're throwing their hats in the ring to be the next speaker including deputy Speaker Lindsay Hoyle and Labour party politician Chris Bryant.