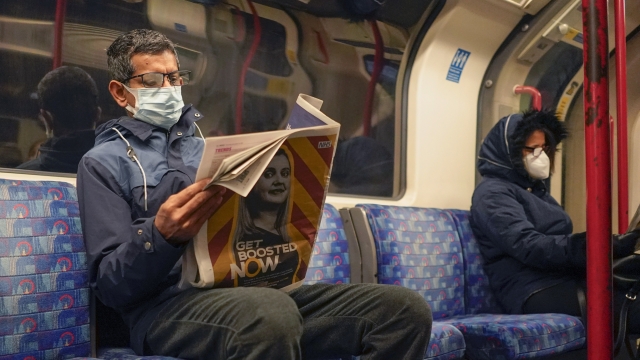 Britain's Prime Minister Boris Johnson is rejecting accusations that new government warnings meant to curb the Omicron variant of the coronavirus will essentially put Britain into another lockdown by stealth.

British restaurants and pubs appealed to the government for business rates relief and value-added tax discounts, warning that fears about the new variant have already had an impact on the sector, with sales already having plunged by a third in the last 10 days — reflecting $2.6 billion in lost trade.

Jonathan Neame, the chief executive of pub and brewery Shepherd Neame, said the government comments and concerns will throw his business back to the start of the pandemic.

"We've seen a significant number of cancellations and that's accelerating every day, and will accelerate even further after the news last night, which seems to have thrown us back into that sort of zombie world of the first week of March, of the pandemic last year," he told Times Radio.

Travel industry officials have also expressed dismay at French restrictions on arrivals from Britain, describing the new rules to prevent the spread of the Omicron variant as a hammer blow to the industry.  The new French measures place limits on reasons for traveling and requiring 48-hour isolation upon arrival. The new rules take effect first thing Saturday.

The comments by Mark Tanzer, chief executive of travel and trade association Abta, came after medical officials expressed alarm at what they described as the phenomenal speed at which the variant is spreading. Travel officials demanded government help to help battered businesses.

"The winter sports and school travel markets are particularly exposed, and the government must now bring forward a support package if we are not to see company failures and job losses," Tanzer said.

Tanzer said the sector has had little opportunity to make money since the start of the pandemic, and will now be faced with another wave of cancellations.

Johnson insisted Thursday that despite fears about the rapidly spreading variant, the situation in the U.K. is different from last year because of the widespread use of vaccines and virus tests.

Johnson says if people want to attend public events, "the sensible thing to do is to get a test and to make sure that you're being cautious.''

"But we're not saying that we want to cancel stuff, we're not locking stuff down, and the fastest route back to normality is to get boosted" with another vaccine dose, he said.

The U.K. on Wednesday recorded its highest daily number of confirmed COVID-19 cases since the pandemic started. England's chief medical officer warned the situation is likely to get worse as the omicron variant drives a new wave of illness during the Christmas holidays.