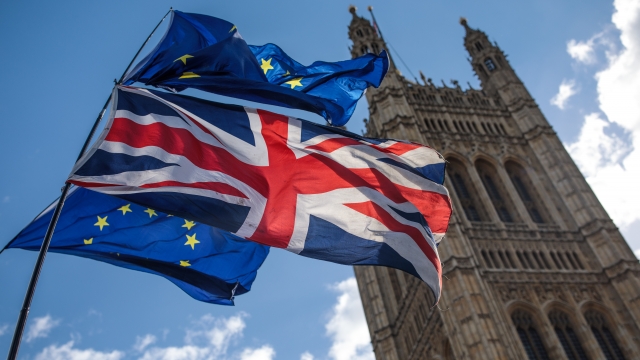 SMS
U.K., EU Agree On Outline Brexit Deal, But It Still Faces Obstacles
By LeeAnne Lowry
By LeeAnne Lowry
October 17, 2019
If a majority of British parliament members don't approve the deal by Saturday, Johnson will be required by law to request another Brexit extension.
SHOW TRANSCRIPT

The United Kingdom and European Union have agreed on an outline Brexit deal.

It's a deal, but it isn't a done deal. The outline needs to be backed by EU member states and U.K. Parliament.

In a letter to the president of the European Council, Juncker recommended that the member states approve the withdrawal agreement because he believes it is "high time to complete the withdrawal process and move on."

Johnson says parliament "should get Brexit done on Saturday" so the country can "move on to other priorities." If a majority of British parliament members don't approve the deal by Saturday, Johnson will be required by law to request another Brexit extension through Jan. 31.

Two main opposition parties in the U.K. quickly opposed the deal on Thursday. Labour Party leader Jeremy Corbyn says it's unlikely the bill will make it through Parliament, calling it "an even worse deal than Theresa May's, which was overwhelmingly rejected."

Johnson now heads to Brussels for a two-day summit with EU leaders.