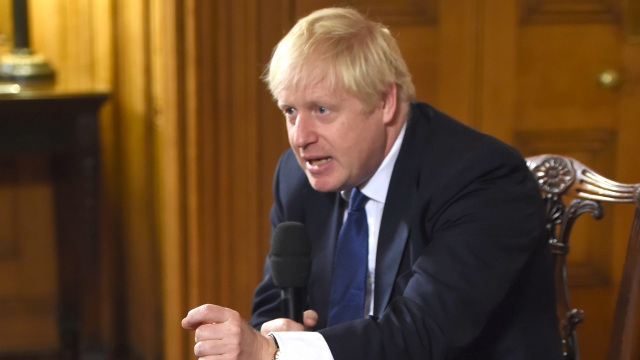 SMS
U.K. Courts To Hear Parliament Suspension Challenges
By LeeAnne Lowry
By LeeAnne Lowry
August 30, 2019
The plan to suspend parliament would give lawmakers even less time to prevent a no-deal Brexit.
SHOW TRANSCRIPT

On Wednesday, Queen Elizabeth II approved Johnson's plan to suspend Parliament's work from Sept. 9 to Oct. 14. That would give lawmakers even less time to prevent a no-deal Brexit.

There are three legal cases against the move: one in Northern Ireland, one in Scotland and one in London. The London challenge is brought by businesswoman and anti-Brexit activist Gina Miller. Earlier this year, she challenged the government in a major Brexit-related case and won. Former Prime Minister John Major has requested the high court's approval to join her in fighting Johnson's decision.

On Friday, judges in both Scotland and Northern Ireland declined to grant preliminary injunctions to block the plan temporarily. The Scottish judge said the decision was made because there will be a full hearing before Parliament is set to shut down.

The first full hearing will start on Tuesday in Scotland, and the London hearing is set to take place Thursday. A judge will decide on Tuesday if the Northern Ireland case should be heard later in the week.