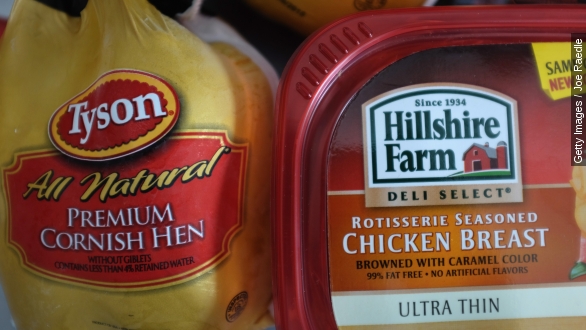 SMS
Tyson Antibiotic Announcement Is Huge And Already Criticized
By Cliff Judy
By Cliff Judy
April 28, 2015
The decision by the U.S.'s largest meatpacker continues a massive paradigm shift for the meat industry, but some already say the move isn't enough.
SHOW TRANSCRIPT

The heaviest hitter in the meat industry yet has pledged to get some antibiotics out of its food. Tyson says by 2017, the company will have stopped giving its chickens human antibiotics.

Tyson is the largest meatpacker in the country, selling one of every five pounds of chicken, beef and pork by some estimates.

"We're confident our meat and poultry products are safe, but want to do our part to responsibly reduce human antibiotics on the farm so these medicines can continue working when they’re needed to treat illness," CEO Donnie Smith said in a statement. (Video via Tyson Foods)

This continues a massive paradigm shift for the meat industry over the last decade as the public and even government agencies pressured companies over antibiotics use. (Video via PBS)

"Twenty-three thousand people die each year from these infections, many more by complications they cause," a CDC spokesman said.

A 2013 study by the CDC warned the overuse of antibiotics in medicine and agriculture was contributing to the spread of drug-resistant bacteria. (Video via CDC)

And while the move is certainly significant just based on the size and scope of the company making it, some have already dubbed Tyson's decision as insufficient.

A writer for the Natural Resources Defense Council called on Tyson to further clarify what the company meant by "human antibiotics" as drugs only used by humans or drugs important to humans.

The Wall Street Journal also pointed out two of Tyson's competitors have already pledged to eliminate all antibiotics from a portion of their chicken production.

Many restaurant chains have begun making various pledges to only serve such food. Those include Panera Bread, Chipotle, Chick-fil-A and McDonald's.

The Journal reports McDonald's actually based its decision to drop human antibiotics from its chicken in part on conversations with suppliers, including Tyson. (Video via McDonald's)

Tyson says human antibiotics will be fully eliminated from its chicken flocks by September 2017, and it also plans to have groups begin meeting this summer to discuss antibiotics use for cattle, hogs and turkey. (Video via Tyson Foods)