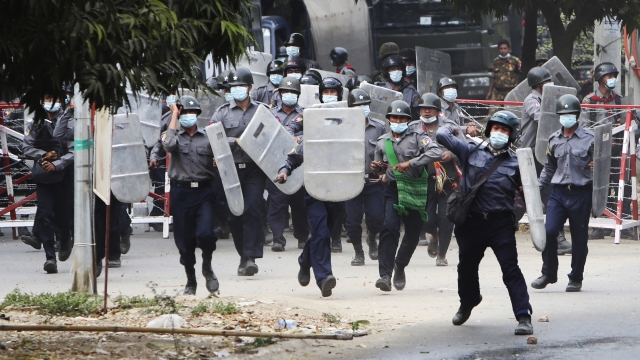 SMS
Two Killed By Police Fire in Myanmar's Third Week of Protests
By Alex Arger
By Alex Arger
February 20, 2021
Demonstrations have been ongoing in Myanmar since a Feb. 1 military coup toppled its democratically-elected government.
SHOW TRANSCRIPT

One person died at at the scene from a gunshot to the head, while the other died en route to the hospital, according to media reports.

Anti-coup protesters later held a tribute for one of the dead, with supporters chanting, "You will be remembered" and "End the dictatorship in Myanmar."

Both police killings occurred in Mandalay, the country's second-largest city. Some 500 security officials descended on the area and deployed water cannons, tear gas, slingshots and rubber bullets - and some live rounds.

The national civil disobedience movement is refusing to work until the military junta reinstates the power to the civilian government it toppled February 1. More than 500 political figures and military critics are still being held, many without charges.