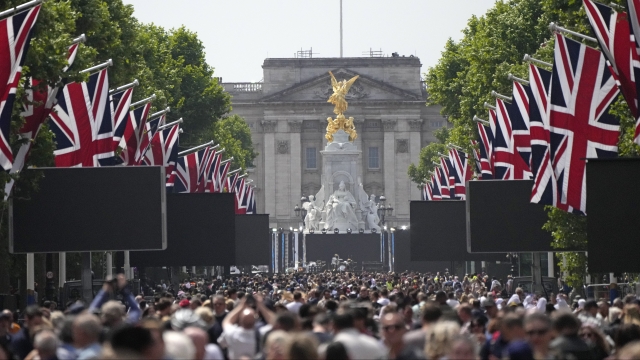 The Platinum Jubilee is celebrating 70 years on the throne for Queen Elizabeth II.

Two future monarchs are set to pay tribute to Queen Elizabeth II at a special concert in front of Buckingham Palace on Saturday, the third day of the Platinum Jubilee extravaganza marking her 70 years on the throne.Prince Charles and Prince William, the queen's son and grandson, are scheduled to address a live audience of 22,000 people and millions more watching on television. The event featuring Alicia Keys and Queen + Adam Lambert will take place in a temporary amphitheater built around the Victoria Memorial outside the palace.David Beckham and tennis player Emma Raducanu will also attend, while Diana Ross will close the show with her first U.K. live performance in 15 years. The concert is also expected to feature a pre-recorded performance by Elton John.The 96-year-old monarch isn't expected to attend the evening outdoor event, with rain in the forecast. The queen has had problems moving around lately, which the palace describes as "episodic mobility issues," limiting her public appearances in recent months.The sovereign opted not to attend the Epsom Derby on Saturday. Instead, she was represented at the prestigious annual horse race by her daughter, Princess Anne, who appeared in the royal box Saturday to crowds cheering and waving Union flags.It was the second time in as many days that the queen's mobility issues have robbed crowds of a chance to see her.On Friday, the queen skipped a special service of Thanksgiving in her honor at St. Paul's Cathedral in London. Palace officials said she had experienced "some discomfort" at events the day before.Prince Harry and his wife, Meghan, were among nearly 50 members of the royal family who gathered to honor the absent head of state. It was the couple's first public appearance in the U.K. since they stepped back from royal duties and moved to California two years ago.In another sign of thawing relations, royal accounts on Twitter wished Harry and Meghan's daughter Lilibet, a happy first birthday. Lilibet turned one on Saturday. She and her older brother, Archie, haven't yet made an appearance during this trip."Wishing Lilibet a very Happy 1st Birthday!'' the Royal Family account tweeted.Meanwhile, other members of the royal family traveled to Wales and Northern Ireland as part of celebrations across the U.K.William and his wife Kate brought two of their three children — 8-year-old Prince George and 7-year-old Princess Charlotte — to Cardiff Castle in Wales before a separate concert in the castle grounds in honor of the queen.The queen's youngest son, Prince Edward, and his wife Sophie, Countess of Wessex, visited Northern Ireland for 1950s-themed festivities.Additional reporting by the Associated Press.