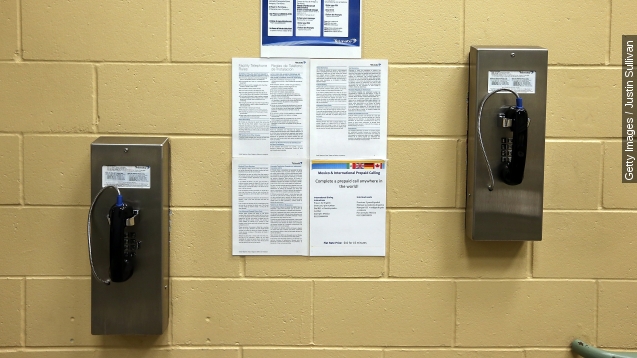 SMS
Two Big Reasons The FCC Went After Prison Phone Fees
By Christian Bryant
By Christian Bryant
October 22, 2015
The FCC voted to reduce inmate phone call rates, saying the exorbitant rates were unfair to many Americans with family or friends in prison or jail.
SHOW TRANSCRIPT

The Federal Communications Commission's vote to limit fees on inmate phone calls is a decision more than a decade in the making.

"On a monthly basis, these phone charges exceed the amount of my groceries and my electric bill combined," Bethany Fraser told the FCC.

"There's a $5 flat fee, $7.95 for me to put money into my phone account, a 5 percent percentage fee," Joanne Jones told the International Business Times.

Proponents of less expensive inmate calls have dubbed the prison phone system unfair and, with calls costing as much as $14 per minute, it's easy to see why.

Private phone companies took over the inmate calling system in the early '90s, and two private companies own the majority of the market: Securus Technologies and Global Tel*Link.

Here's how it works: Jails and prisons submit bids to private companies, like Securus and Global Tel*Link. Those companies offer packages to those inmate facilities, which include revenue returns called site commissions.

"You're monitoring that phone call. That takes manpower, that takes time. ... We're looking at upping the number of calls, right? But yet, not increasing capabilities or the resources that go with it. That is a huge challenge for sheriffs," said Jonathan Thompson, CEO of the National Sheriffs' Association.

Rates are high, in part, because commissions are high. While the FCC didn't touch commissions, it capped rates because of the burden they put on families and friends.

There's another big reason the FCC sought to reform the prison phone system: recidivism. The most recent Bureau of Justice Statistics show that two-thirds of released prisoners are arrested within three years. That stat jumps up to 75 percent within five years of release.

But many studies say communication with family and friends outside of jails and prisons is a way to help reduce recidivism. That can be accomplished when friends and family aren't paying heavy fees for inmate calls.

While there could be some pushback from private telephone companies and inmate facilities, the FCC also laid out plans for taking prison phone system reform even further. Those plans include promoting competition in inmate calling services and examining the cost of video visitation and other ways to communicate with inmates.