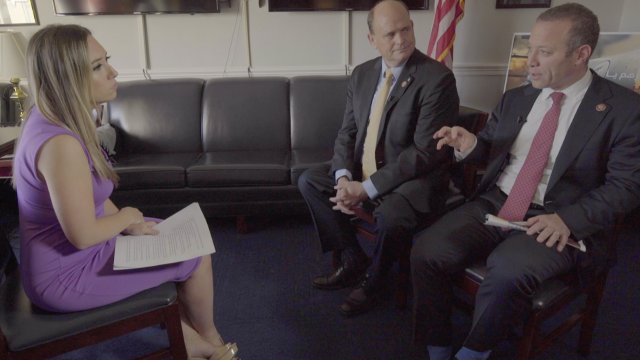 Twitter has been warned by both Democrats and Republicans. They are demanding a reply.

Four members of Congress have demanded the social networking company take down accounts associated with dozens of organizations deemed terrorist organizations by the U.S. State Department. Among the list of 68, Hamas and Hezbollah.The deadline for a response from Twitter: Nov. 1. Twitter isn't expected to reply, raising questions about what can happen next.

Twitter's letter to the congressmen, obtained by Newsy, says, "A Twitter user is not allowed to affiliate with and promote the illicit activities of a terrorist organization or violent extremist group." The company went on to say it makes limited exceptions for "groups with representatives who have been elected to public office through elections as is the case with parts of Hamas and Hezbollah."

A 1996 law says Americans cannot provide material support or resources to foreign terrorist organizations, which is exactly how Hamas and Hezbollah have been classified since 1997.

This is just the latest in a string of issues tech companies are facing as their footprint extends beyond the United States. But the congressmen say even for Twitter, an American company, this isn't a free speech issue. Gottheimer says in addition to calling CEO Jack Dorsey before Congress, they'll pursue other avenues.

When Newsy asked Twitter for comment, it reiterated the same information it sent to the congressmen, pointing out that the company draws a distinction between political and military factions, something the United States government does not.