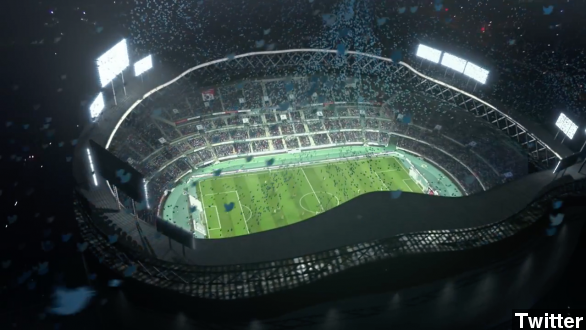 By Mikah Sargent
June 11, 2014
Twitter introduces loads of special features for the World Cup, but are they for more than just fun and (soccer) games?
SHOW TRANSCRIPT

Twitter is kicking it into high-gear for this year's World Cup. The social media company is not interested in having a repeat of World Cup 2010.

During the 2010 games, it wasn't all too uncommon to see the infamous "fail whale," letting users know Twitter was having trouble handling the amount of tweets pouring in. (Via Twitter)

Fast Company spoke with Twitter's vice president of platform engineering who said he "still [has] PTSD from the last World Cup at Twitter." The World's biggest sporting event brings in a lot of attention, but Twitter's more prepared than ever, with "a system of 'shock absorbers' — redundant servers designed only for service when the network is extremely busy — around the world that kick in during extremely high traffic periods."

So the Big Blue Bird has improved its ability to handle popular, much-tweeted-about events. And this year it's introducing loads of special features to help users keep track of what's going on in Brazil. (Via Twitter)

Signing up for the first time to follow along with the action on the field? Twitter makes it easy with World Cup profile and header photos.

The social media company is keeping a World Cup timeline, chock-full of info on and off the field. You can also keep track of matches with handy scoreboards. (Via Twitter)

Twitter is also providing a "World Cup starter kit" for different teams — making it easy to follow players, fans and more associated with a specific team.

And, of course, Twitter's bringing back the so-called Hashflags. To access the emoji-like flags, simply type in a hashtag symbol followed by a three-letter country code. No word yet on the availability of vuvuzelas. (Via Twitter / @mikahsargent)

The Next Web reports the social media company will be keeping track of tweets with hashflags for an event called "The World Cup of Tweets." Vote for your favorite country with a hashflag.

Basically, Twitter's pretty darn serious about getting users involved with the World Cup.

A writer for Quartz says the World Cup timeline is ​"Twitter's biggest foray into algorithmically driven content curation so far." ​It's a play for active, engaged users.

Apparently Twitter has a way of overwhelming new users with too much information too fast. The algorithmic curation will help the social media giant pull in users and keep them interested.

According to The Verge, Twitter has custom timelines for each match as well, so you can view up-to-date information as you follow along.

But in the end, the features are more than just fun and (soccer) games. It's all about that bottom line.

A writer for Ad Age says Twitter's trying to grow in the face of, well, Facebook. And the World Cup seems to be the event that could do just that. "[The World Cup] offers an attentive, obsessive audience of die-hard fans in parts of the globe where Twitter has the most room to grow." (Via Flickr / Choo Yut Shing, Scott Beale)