Twitter's Response To Abuse Isn't Perfect, But It's A Start 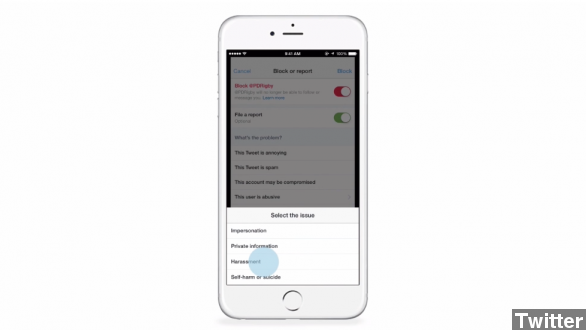 Twitter took another step Tuesday toward booting trolls from its network by making it easier for users to report instances of abuse.

A video posted to Twitter's support account shows that users will soon be able to file reports and quickly specify the nature of abusive incidents — even if the user doing the reporting isn't directly affected.

Twitter has been criticized before for not being able to stamp-out harassment when it shows up on the network — and a few recent examples have made that clear. Those include abusive tweets sent to Zelda Williams after the death of her father, Robin Williams, and threats sent to women gaming writers during #Gamergate.

A CNET writer says there are still some problems with Twitter's update. The process of reporting users isn't automated, so each instance will still need a separate report and Twitter must manually review those reports. As you can imagine, that could cause delays.

And a New York Times writer believes the new tools won't do much to stem abuse on Twitter but adds the tech giant is also working on a way for users to report multiple instances of abuse at once.

Twitter didn't say the updates are a cure-all for abuse on its network but considers them to be a start. The updates are now available to select users, but all 284 million active users will reportedly see the changes in the next few weeks.