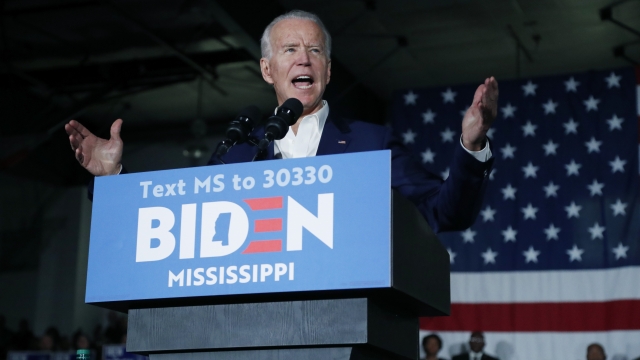 SMS
Twitter Applies 'Manipulated Media' Tag To Video Of Joe Biden
By Tyler Adkisson
By Tyler Adkisson
March 9, 2020
This was the first tag of its kind on Twitter, but it's not clear how effective it was; the video had at least 5 million views before being tagged.
SHOW TRANSCRIPT

Twitter recently applied a "manipulated media" label to a deceiving video of Joe Biden posted by White House social media director Dan Scavino and retweeted by President Donald Trump. The tweet is believed to be the first to ever receive this designation. But it's unclear how effective the tag has been so far. It's likely that millions who saw the video may have not seen the notice.

The tweet received the label for violating Twitter's synthetic and manipulated media policy, which went into effect March 5. Without context, the video appears to show Biden endorsing President Trump. But that's because the video edits out his second sentence.

"Excuse me. We can only reelect Donald Trump."

"Excuse me. We can only reelect Donald Trump if, in fact, we get engaged in this circular firing squad here. It's got to be a positive campaign."

Dan Scavino and other Trump associates insist the video wasn't manipulated. But Facebook also applied a warning label to this video, saying its independent fact-checkers found the video was "misleading."

It's unclear how many people who saw the video actually saw those flags, especially on Twitter. In the 18 hours from when Scavino's tweet was published to when it was flagged, the video racked up at least 5 million views and 20,000 retweets. Scavino's Facebook post is still up, and it's been seen at least 1 million times and has been shared 24,000 times.

Twitter told Newsy that they’re "continuing to look into why the label is not appearing in some places outside of the home timeline" — meaning the Tweet would not contain this label if you searched for it. Facebook also reportedly only put the label out on Sunday night after Biden campaign manager Greg Schultz released a statement criticizing the company's handling of the video.