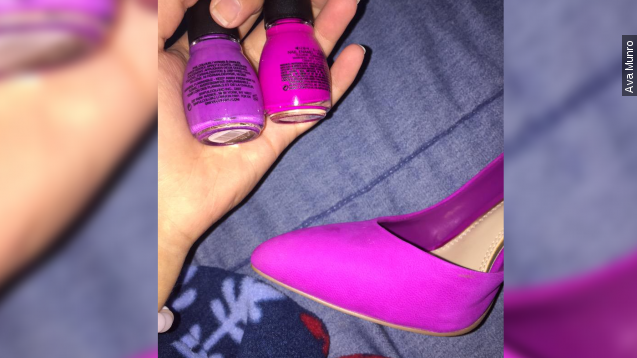 SMS
Twitter Nail Polish Debate Goes Viral: Welcome To #TheShoe
By Jake Godin
By Jake Godin
July 10, 2015
Folks on Twitter are debating which nail polish a woman should use to match her shoes — apparently it's not as simple as it sounds.
SHOW TRANSCRIPT

So there’s this shoe…

“Get ready, the newest Internet debate is here and it’s mind blowing,” said a KCEN anchor.

Ava Munro, who uses the Twitter handle @totallymendes, tweeted to her followers a simple question — which nail polish fits her shoe better?

That, it turns out, was a divisive question. Everyone, shield your precious Internet eyes, it’s #TheDress all over again. You ready?

People couldn’t decide — the one on the left, the one on the right, maybe both? Before you knew it, #TheShoe was trending. The slew of responses certainly surprised Munro, who told Newsy she was just hoping for a few opinions.

Right. So let’s figure out the colors here since that seems to be the crux of the issue.

First, the shoe itself. It’s from BCBG, and is listed as the color “Magenta” at least at one retail outlet.

As for the polishes, Munro sent Newsy a photo and, well, uh, as it turns out, both are labeled as the “Dream On” color. She also said both are from the nail polish company, SinfulColors.

Checking out their website doesn’t do us much good. They only have one product labeled as “Dream On,” which they say is purple.

Even more confusing, Kmart lists a reddish-looking polish as the “Dream On” label. Though Walmart matches what SinfulColors itself shows.

Both news outlets and the denizens of social media have compared it to that whole #TheDress debacle that melted the Internet in February.

While we kind of see where they’re coming from, we’re not sure it’s that much of an optical illusion.

I mean, look. We’re talking about deciding between two different colors of nail polish here and a magenta shoe. It’s not the same optic science that Wired had to break down for everyone back in February.

Though hey, maybe it is — after more than 6,500 retweets, there still doesn’t seem to be a definitive consensus on which polish to use.

Add to that the fact the Internet was NOT helpful and Munro says she still hasn’t decided what color to use.

This video includes images from Ava Munro and music from Bensound / CC BY 3.0.