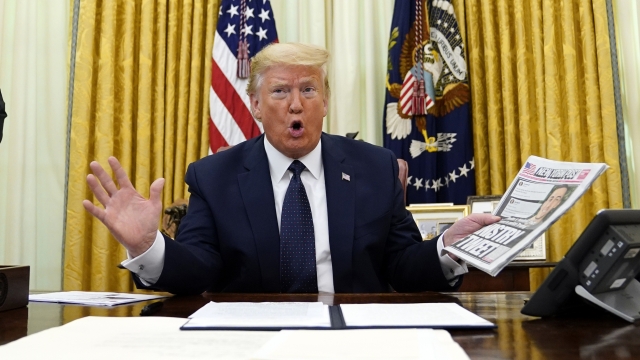 SMS
Twitter Flags President Trump's Tweet For Glorifying Violence
By Tyler Adkisson
By Tyler Adkisson
May 29, 2020
Trump has a long history of breaking Twitter's rules on threatening or glorifying violence, but this is the first time he's been reprimanded for it.
SHOW TRANSCRIPT

The tweet was in response to ongoing protests in Minneapolis. In it, President Trump said "the Military is with" Minnesota's governor and that “any difficulty and we will assume control but, when the looting starts, the shooting starts.”

According to Twitter’s official communications account, the platform applied the label “in the interest of preventing others from being inspired to commit violent acts.” But it said it would leave the tweet up because the public should “still be able to see the Tweet given its relevance to ongoing matters of public importance.”

In order to see the tweet, users have to click through an explanation about why it was flagged. The notice also limits engagements with the tweet, meaning people won't be able to like, reply or retweet it. They can retweet with comment.

Twitter’s response is notable because it's a slight deviation from how it's handled past threats of violence made by the president. Historically, Twitter hasn’t reprimanded President Trump for breaking those rules. 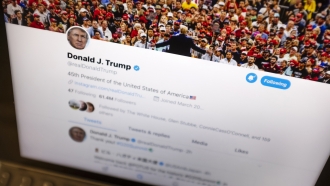 For instance, in 2017, he made a threat toward North Korea and its leader, Kim Jong-un, saying “they won't be around much longer!” While Twitter recognized the tweet broke rules against promoting violence, it decided that it should stay up because of its “newsworthiness.”

Since then, he’s made similar threats toward Iran. In early 2020, President Trump published a series of tweets saying that if Iran retaliated against the U.S. for killing one of its top ambassadors, it would face U.S. attacks on “52 Iranian sites.” Twitter did not apply warning labels to those tweets.

Regardless, the move will likely escalate ongoing tensions between Twitter and the president. Earlier this week, the company fact-checked two of President Trump’s tweets for containing misleading information about voting.

President Trump responded by signing an executive order intended to scale back Section 230 of the Communications Decency Act — a law that protects social media companies from being sued over content posted to their platform and allows them to decide how they’ll moderate that content.