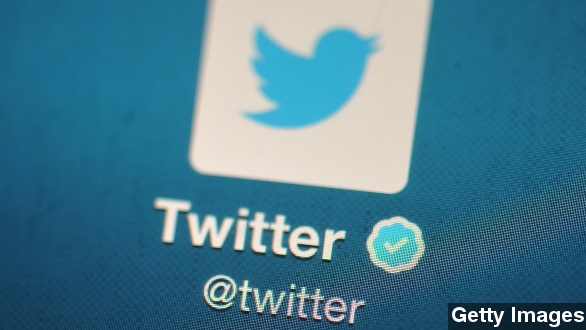 By Jake Godin
July 29, 2014
After reporting a strong second quarter in both revenue and active monthly users, Twitter saw a big boost to its shares in after-hours trading.
SHOW TRANSCRIPT

Twitter revealed it's second quarter revenue Tuesday and things are looking pretty good for the blue bird. (Via Getty Images)

After reporting both strong user and revenue growth, Twitter's shares grew an incredible 35% in after-hours trading. (Via Getty Images)

The social media company's monthly active users grew 24 percent from 255 to 271 million and revenue more than doubled from $139 million last year to $312 million this year. (Via Twitter)

So, the company is doing well. In fact, it's doing better than Wall Street had expected it to.

According to Bloomberg, analysts predicted 2 percent fewer users and 10 percent lower revenue than the company actually delivered in this report.

So where did all that unexpected growth come from? Turns out large social events like the World Cup might have given big boosts for the company's bottom line. (Via Twitter)

Re/code reports Twitter CEO Dick Costolo talked extensively about how the Cup drew users to the platform, though he was quick to add that Twitter's growth doesn't depend solely on big events.

But, it's not all good news for the social media giant.

Unlike the general fanfare that other sites were sharing, a writer at The Washington Post was sure to point out, even with all the positive numbers, Twitter still isn't turning a profit. The company reported a loss of $144.6 million, or 24 cents per share.

TechCruch did point out that the loss was expected by investors though, making it not "too much of a drag."

And as The Wall Street Journal notes, something the social media company may still have up it's sleeve is it's newly planned metrics for measuring it's "logged-out audience", or the people who don't sign into Twitter but are still exposed to its content.

Twitter is expecting its third quarter revenue to grow to between $330 and $340 million.