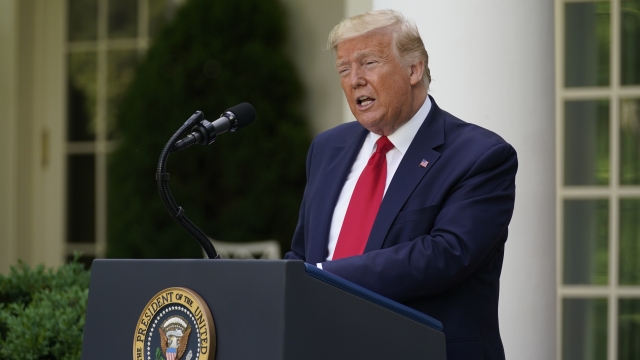 Twitter added a fact-check label to President Trump's tweets for the first time after he made false claims about mail-in ballots.

On Tuesday, the president wrote on Twitter: "There is no way ... that Mail-In Ballots will be anything less than substantially fraudulent. Mail boxes will be robbed, ballots will be forged & even illegally printed out & fraudulently signed." He also said, "This will be a rigged election."

The fact-check label says, "Get the facts about mail-in ballots." Users who click on it are guided to a Twitter "moments" page with fact-checks and news stories about the president's unsubstantiated claims.

President Trump's campaign responded, saying Twitter is trying to "obstruct and interfere with President Trump getting his message through to voters" and is using the fact-check badge as "a smoke screen ... to try to lend their obvious political tactics some false credibility."

The campaign said Twitter's "clear political bias" is partly why it pulled advertising from the social media site. But it's worth noting that Twitter CEO Jack Dorsey announced in October that political ads, which he said "can be used to influence votes to affect the lives of millions", would be banned from the site.

Additional Reporting by Dino Hazell and Barbara Ortutay of The Associated Press.