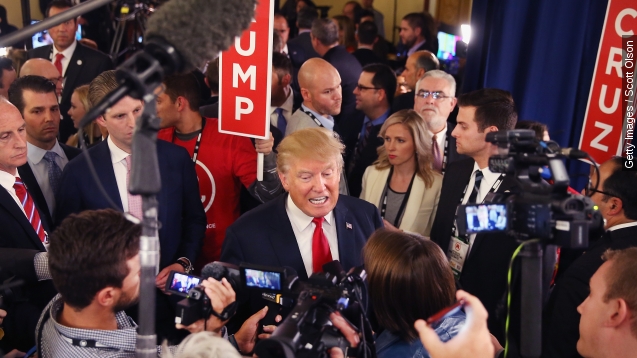 SMS
TV Networks Team Up Against Trump's Press Restrictions
By Grant Suneson
By Grant Suneson
November 23, 2015
The five largest news networks are teaming up to push back against Donald Trump's campaign staffers restricting journalists' access at his rallies.
SHOW TRANSCRIPT

Donald Trump’s presidential bid has been dominating the media over the past few months, but not only in terms of coverage. His staffers are allegedly dictating where journalists can and can’t go during his rallies. Now the five largest TV outlets want to put a stop to it.

The Washington Post reported that representatives from ABC, CBS, NBC, CNN and Fox all had a conference call about Trump’s camp putting media members in “pens,” which prevents them from interacting with any supporters at Trump’s campaign events.

A news executive told Politico, "The effort in the Trump campaign is to limit any kind of interaction between our reporters and the people attending the Trump events. So we'd like to have some access to folks.”

These pens are nothing new. Most campaigns have designated media areas, but more as a suggestion of where to go rather than a strict holding cell. And the reporters are apparently fed up to the point where they’re working together to fix it.

Some network sources said the outlets are in contact with each other when coordinating coverage, but having the five largest TV news channels converge to make demands of a campaign is unprecedented.

Several reporters tweeted they'd been barred from speaking with event attendees, and Trump’s campaign manager was filmed threatening to revoke the credentials of a CNN reporter who left the pen to cover a protester.

And these aren’t just empty threats. Outlets like BuzzFeed and The Huffington Post have been denied credentials, and The Des Moines Register was blacklisted after running an opinion piece that called on Trump to end his campaign.

A network executive told Politico the outlets want to come up with a single, unified response to the Trump campaign. They reportedly want to work toward a deal on how reporters will be managed and put an end to staffers threatening to blacklist journalists. (Video via MSNBC)