Turns Out Your Sunscreen Could Be Killing Coral Reefs 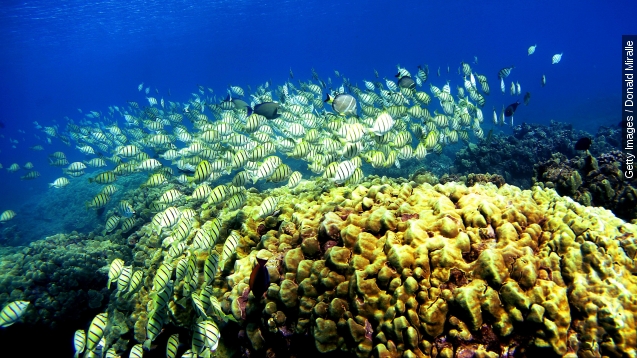 A new study released Tuesday says sunscreen is a threat to coral reefs.

More specifically, the toxicity of a common sunscreen ingredient, oxybenzone.

Researchers in Hawaii and the U.S. Virgin Islands studied the effects that ingredient had on multiple species of coral.

The study concluded oxybenzone "poses a hazard to coral reef conservation and threatens the resiliency of coral reefs to climate change."

One of the biggest climate change threats to coral is something called coral bleaching. (Video via NOAA)

Things like changing ocean temperatures and polluted runoff can cause algae that lives on coral to leave, making the coral pale in color.

But it's about more than just looks — coral depends on algae for food. And without algae, coral is prone to disease.

In the study, the larval form of coral showed more coral bleaching with more exposure to oxybenzone. (Video via NOAA)

The findings showed that even a small amount of the ingredient can damage coral.

As The Washington Post put it, "The equivalent of a drop of water in a half-dozen Olympic-sized swimming pools" can have negative effects.

Oh, and people collecting samples for the study didn't wear sunscreen, in case you were wondering.