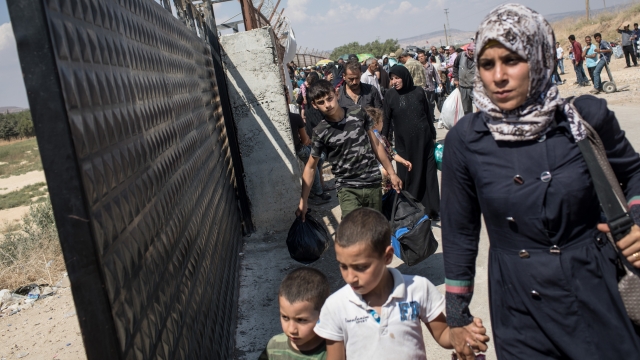 The president of Turkey is threatening to flood Western countries with Syrian refugees if he doesn't get concessions to establish a "safe zone" in Syria for as many as 1 million people.

Turkey has taken in more refugees from Syria's nine-year year civil war than any other nation. It is home to 3.6 million displaced Syrians, including more than 500,000 in Istanbul.

Now Turkey wants to move as many as 1 million Syrians out of its cities and into a refugee safe zone east of the Euphrates River in Syria. Currently, 100,000 refugees are living in camps close to the Turkish-Syrian border.

President Recep Tayyip Erdogan wants an agreement from the U.S. to facilitate the refugee resettlement. He also wants U.S.-backed Syrian Kurdish troops to withdraw from the border area and away from the proposed safe zone.

If there is no such concession, Erdogan says he will seek to locate more refugees into Europe and other Western countries. He said this week: "We will be forced to open the gates. We cannot be forced to handle the burden alone."

The Turkish economy is floundering, with a 13 percent unemployment rate, and hostilities toward refugees are on the rise. According to a recent poll, nearly 68 percent of Turks are unhappy with the refugees' presence. The Associated Press reports that hundreds of Syrians have been forcibly deported in recent weeks. That has fanned protests over anti-immigrant attitudes.

The European Union has contributed more than $6 billion to aid resettlement and improve living conditions for refugees in Turkey. But Erdogan said: "We did not receive the support needed from the world and, especially, the European Union."