After Reporter Disappears, Turkey Will Probe Inside Saudi Consulate 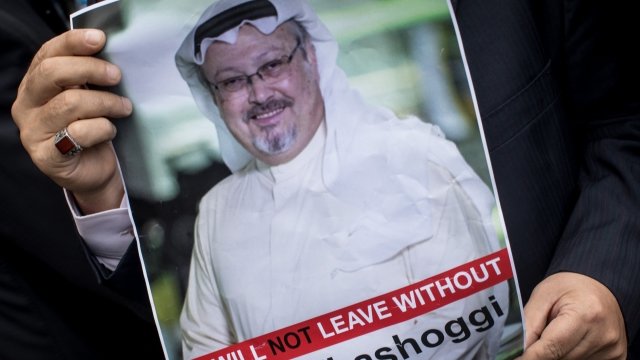 SMS
After Reporter Disappears, Turkey Will Probe Inside Saudi Consulate

By Katie Cammarata
October 9, 2018
Jamal Khashoggi disappeared a week ago after he went into the Saudi consulate building in Istanbul to get marriage paperwork but never came out.
SHOW TRANSCRIPT

Turkish authorities will investigate inside the Saudi Consulate in Istanbul after the mysterious disappearance of Saudi journalist Jamal Khashoggi.

Turkey's foreign ministry said in a statement on Tuesday that Saudi authorities reached out and said they're open to cooperating with a Turkish investigation of Khashoggi's disappearance.

The Washington Post columnist went missing a week ago after he went into the Saudi consulate building to get marriage paperwork but never came out. Turkish officials claim Khashoggi was killed inside the building, but Saudi Arabia denies the allegations.

On Monday, Turkish President Recep Tayyip Erdogan said he's personally "chasing" the investigation into the disappearance of his friend, and that Turkish officials are investigating "everything."

He also called for Saudi Arabia to provide evidence, like surveillance footage, that proves the journalist left the consulate building safely.

Khashoggi used to be a Saudi government adviser, but has been critical of the current leadership. He has written multiple columns recently in The Washington Post where he criticized Crown Prince Mohammed bin Salman.