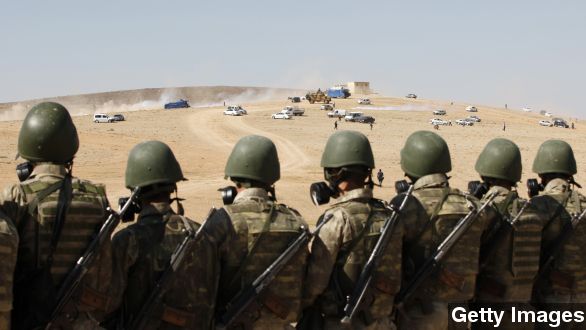 After months of standing on the sidelines, Turkey is now sending troops into Syria, but the mission isn't to fight ISIS.

Instead, Turkey sent soldiers into the war-torn country over the weekend to relocate the tomb of an important Turkish historical figure and evacuate the soldiers assigned to guard it. (Video via CCTV)

The tomb of Suleyman Shah is a Turkish enclave within Syria, and it's guarded by a group of Turkish military, which the BBC reports usually numbers around 40. (Video via BBC)

Suleyman Shah, was the grandfather of Osman I, who founded the Ottoman empire, which ultimately gave rise to the modern Turkish state.

The tomb is in Syria because it was formerly a part of the Ottoman empire, and it had been moved to its current location, less than 20 miles from the border town of Kobani, in the 1970s. (Video via Google)

Turkish President Recep Tayyip Erdogan had said in the past he would consider any attack on the tomb as an attack on Turkish soil and by extension NATO, as Turkey is a member. (Video via Bloomberg)

Despite its parliament voting in favor of allowing military operations against ISIS, Turkey has avoided getting involved in the fight, possibly due to fears over the influence of allied Kurdish militias.

The Kurdish Peshmerga has spearheaded much of the on-the-ground campaign against ISIS in northern Iraq, and the Turkish government fears it could inspire increased separatism in Turkey's own restive Kurdish population. (Video via Vice)

As part of the evacuation, the Turkish military destroyed Shah Suleyman's mausoleum and plans to temporarily relocate the tomb.