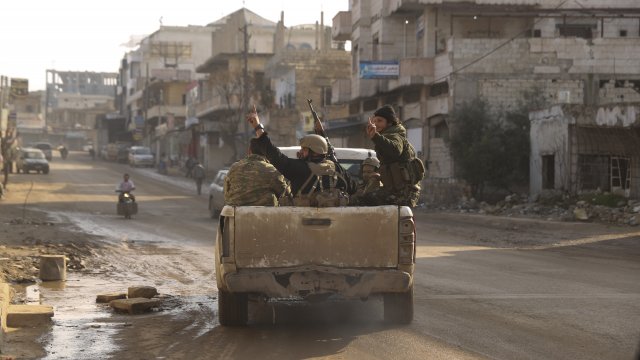 According to the Associated Press, armored vehicles and trucks carrying tanks drove into rebel-controlled rural areas of Idlib province Friday. The outlet says this is the fifth time Turkey has deployed new troops into Syria in recent days.

On Monday, rare violent clashes between the neighboring countries' forces left casualties on both sides.

Authorities in Turkey said several of its soldiers were killed in an artillery attack launched by the Syrian government in Idlib. Retaliation from Turkey came just hours later in the form of shelling and airstrikes in northern Syria.

Turkish President Recep Tayyip Erdogan has threatened to push back Syrian troops in Idlib if they don't retreat on their own by the end of the month. His country has troops stationed at multiple observation posts in Idlib. Three of those posts are currently inside Syrian-controlled areas, but anonymous Turkish security sources say there are no plans to evacuate.

For years, Syrian President Bashar al Assad has tried to take back the last rebel stronghold in the country, which includes Idlib and parts of Aleppo. Syrian troops have been advancing on the area since late last year as an earlier ceasefire unraveled.

Turkey, on the other hand, backs the Syrian opposition and wants to prevent an all-out offensive to protect its rebel allies. The violence has forced hundreds of thousands of people to flee the area in recent weeks.