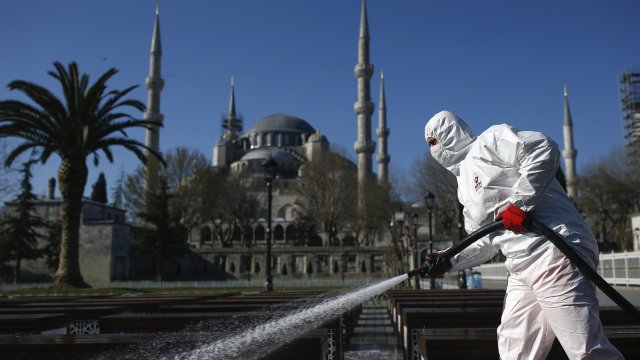 SMS
Turkey Sees Surge After More Accurate COVID Case Reporting
By Alex Arger
By Alex Arger
November 29, 2020
Under pressure from doctors, Turkey has resumed reporting of all coronavirus cases and now ranks as one of the hardest-hit countries in Europe.
SHOW TRANSCRIPT

Turkey has started reporting all of its positive coronavirus tests again — a move that is quickly shifting the country's status from being one of least-affected in Europe to one of the worst-hit.

Turkey almost quadrupled its daily caseload as it resumed reporting all positive tests instead of just the number of patients treated for symptoms. Its previous way of counting made it look well-off in comparison to other European countries with surging numbers.

The Turkish Medical Association has been warning the government for months that its lack of transparency was contributing to a surge...and *still says the government's numbers are too low.

Contact tracers are beginning to lose track of transmissions, and understaffed hospitals are struggling to deal with the nearly 30,000 daily cases. Last month, the country suspended leave for health care workers and temporarily banned them from quitting.

Meanwhile, the country's president has said hospitals are having "no problem" dealing with the caseload. He's blamed the public for any surge, saying they're failing to abide by mask and social distancing rules.

Turkey's government introduced weekend curfews for the first time since June last week, and closed shops, salons and sit-down restaurants and cafes. But critics say the restrictions are "half-baked" and that the country needs a total lockdown as some cities are experiencing their third peak.