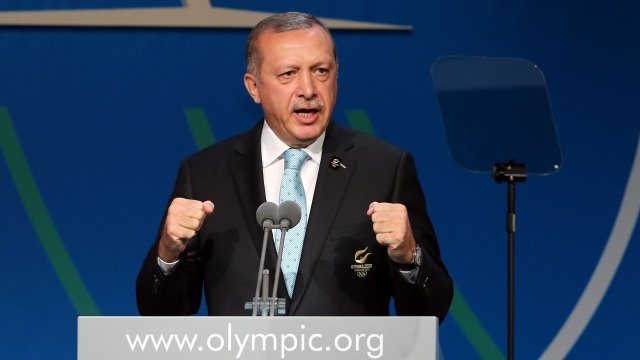 SMS
Turkey's President Announces Boycott Of US Electronics
By Katherine Biek
By Katherine Biek
August 14, 2018
His announcement came as the two countries are still at odds over the release of a U.S. pastor who's been detained in Turkey for nearly two years.
SHOW TRANSCRIPT

While announcing the boycott Tuesday, President Recep Tayyip Erdogan specifically called out Apple as an example. "If [the U.S. has] the iPhone, there is Samsung elsewhere," he said. Erdogan didn't provide other details, including how his government would enforce such a ban.

This appears to be in response to President Donald Trump doubling tariffs on aluminum and steel imports from Turkey. Those taxes are now 20 percent and 50 percent, respectively.

The two sides are at somewhat of a standoff over the release of American pastor Andrew Brunson, who's been detained in Turkey for nearly two years now. Turkey claims Brunson has connections to two groups the country considers terrorist organizations — something Brunson denies.

National Security Adviser John Bolton reportedly told the Turkish ambassador to the U.S. on Monday that until Brunson is freed, the U.S. has no plans to negotiate any further.