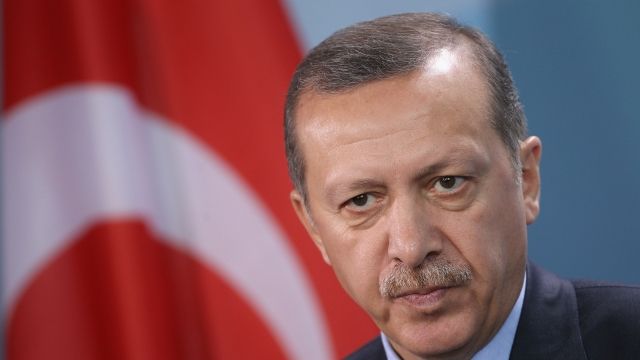 SMS
Turkey's President Accused The US Of Helping ISIS In Syria
By Ryan Biek
By Ryan Biek
December 28, 2016
He said he had photos and video to prove it.
SHOW TRANSCRIPT

Turkish President Recep Tayyip Erdogan accused the U.S. of supporting ISIS in Syria, saying he had photos and video to prove it.

Besides ISIS, he also called out the U.S.' support of groups of Kurdish fighters, like the YPG.

But the problem here is the YPG has been one of the most successful groups in the fight against ISIS.

It's complicated, though. Turkey considers the YPG a terrorist group, but the West disagrees.

Turkey says the YPG is linked to another Kurdish group called the PKK, which has been fighting against Turkey's government since the '80s.

Erdogan has been called hostile to the Kurds' cause in general. In fact, Kurds have accused Turkey of only fighting ISIS as a smokescreen so it can bomb Kurdish forces in Syria.

Erdogan's claim about ISIS could be a way for him to express his disappointment in President Obama's policies on Syria.

One analyst told Al Jazeera, "Turkey believes that the Obama administration does not have the capability to hurt Turkey at this point."

Erdogan himself has been accused of aiding ISIS in the past.

As of Wednesday morning, Turkey hadn't released any of that evidence it claims to have. The U.S. described the accusation as "ludicrous."