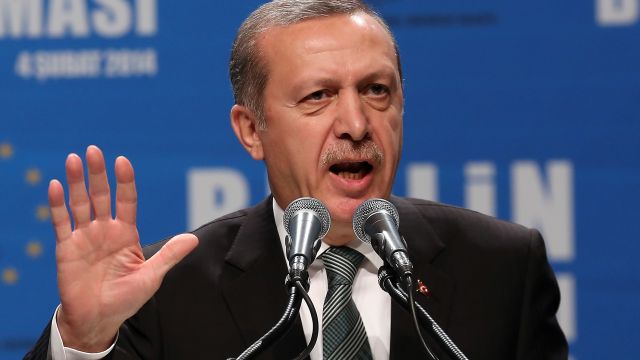 SMS
Turkey's New State Of Emergency Furthers Erdogan's Power Grab
By Matt Picht
By Matt Picht
July 20, 2016
Turkey's new state of emergency could suspend most of the rights and freedoms set out in the country's constitution.
SHOW TRANSCRIPT

Turkish President Recep Tayyip Erdogan has declared a national state of emergency for three months — which Turkey's constitution allows him to do if you count the recent coup attempt as "aimed at the destruction of the free democratic order."

On paper, the decree could suspend most of the constitutionally guaranteed rights and freedoms Turkey's citizens enjoy. In the past, that's meant curfews, military checkpoints and reduced legal rights.

Erdogan defended the post-coup crackdown by pointing out that European countries like France and Belgium have imposed similar measures in the wake of a major attack. But those states of emergency are typically more limited — France used its state of emergency to pass a few anti-terror laws and call up thousands of extra security personnel.

Turkey's government insists this state of emergency won't affect most civilians and says this is a necessary measure to root out the sympathizers of last week's coup attempt. The country has already purged thousands of government officials, teachers, police and military members over alleged links to the foiled plot.