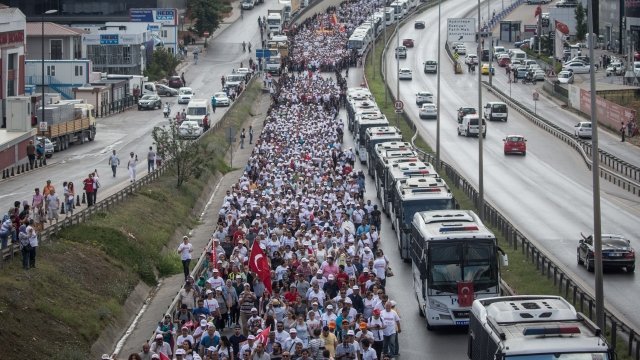 Hundreds of thousands of people marched into Istanbul on Sunday to protest the mass incarceration that has taken place since last year's attempted coup.

The "March for Justice" started 280 miles away in the country's capital, Ankara.

The culmination of the three-week march comes less than a week before the anniversary of the failed 2016 coup attempt. In the year since, over 50,000 people have been arrested and 140,000 people have been dismissed or suspended from their jobs because they were suspected of opposing the Turkish government.

The catalyst for the march was the arrest of a lawmaker from Turkey's main opposition party for allegedly leaking documents to the press.

Another point of controversy in the past year was a referendum that granted Turkish President Recep Tayyip Erdogan more power. As president, Erdogan can set the national budget, issue decrees, appoint officials and appoint the majority of the judges to the country's constitutional court — all with little legal oversight.

The protest is technically in violation of Turkey's state of emergency, which has been in place since the attempted coup. So far, security forces haven't attempted to stop the march, but police have been escorting it.

But one expert told France 24 the protest puts Erdogan in a tough spot; he either has to allow open opposition in the street, or respond with some level of force.