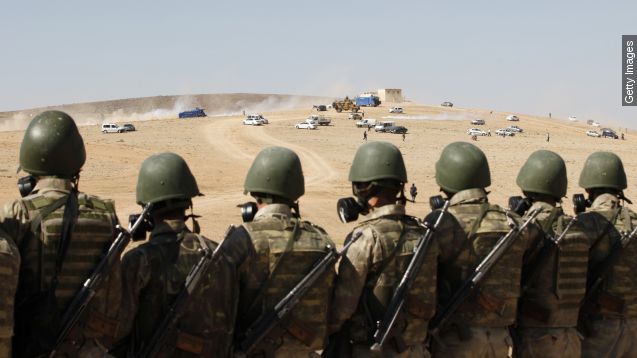 The enemy of my enemy is my friend — or so they say. But in the Middle East, the enemy of your enemy is probably also your enemy. At least that's the case in Turkey.

To summarize: Turkey is fighting Kurds, who are fighting ISIS, which is against Turkey, both of which (along with the U.S. and many Gulf states) would like to see Syria's Bashar al-Assad out of power. Confused? We'll break it down.

After months of pressure from the U.S.-led coalition fighting ISIS, Turkey announced it will take a more active role in the campaign. (Video via U.S. Central Command)

Turkey is now targeting ISIS positions in Syria. But in northern Iraq, it's also targeting the Kurdistan Workers' Party — also known as the PKK.

What's the connection to ISIS? There isn't one, really. Turkey and the PKK are longtime foes and until recently, were caught up in a conflict that killed tens of thousands of people. Both Turkey and the U.S. label the PKK a terrorist organization because of its history of targeting civilians. (Video via Claudio von Planta / CC BY-NC-ND 3.0)

To complicate things, the PKK works with the same Kurdish militias, who are not only fighting ISIS in Syria but are backed by the U.S.

This means Turkey and ISIS — also rivals — are essentially on the same side of the conflict in Syria. Both want to oust Assad, but not if Iran and its proxies can help it.

That's to say nothing of the myriad Syrian rebel groups who also want to see Assad go — some of whom Turkey backs but the U.S. is far from friendly with.