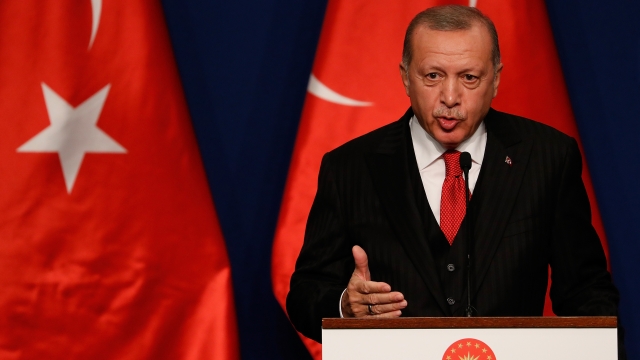 SMS
Turkey Returns Suspected American ISIS Member To The U.S.
By LeeAnne Lowry
By LeeAnne Lowry
November 16, 2019
When the man arrived in Virginia, authorities questioned him and inspected his electronics.
SHOW TRANSCRIPT

An American suspected of being a member of ISIS has arrived in the U.S. after being held in Turkey.

The Associated Press reports he arrived in Virginia Friday night. Federal authorities questioned him and inspected his electronics.

Turkey tried to deport the man to Greece on Monday, but Greece wouldn't let him in. Turkey's interior ministry announced Thursday that the U.S. had committed not to block the suspected militant from entering the country.

Turkish President Recep Tayyip Erdoğan says Turkey is holding approximately 1,200 suspected ISIS militants. Turkey started to send fighters back to their home countries Nov. 11. So far, it says it's sent one fighter to London and seven to Berlin.

Earlier this month, Turkey's interior minister said his country "is not a hotel" for foreign-born ISIS members. He said countries including the U.K. and the Netherlands are "taking the easy way out" by revoking citizenship of terrorists.