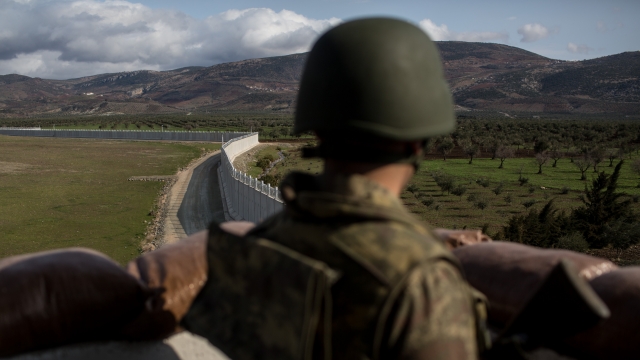 Turkey's planned military offensive into Syria against the Kurdish People's Protection Units and the Kurdistan Workers Party is underway.

Turkish President Recep Tayyip Erdoğan announced on Twitter Wednesday that Turkish armed forces, along with the Syrian National Army had just launched Operation Peace Spring in an effort "to prevent the creation of a terror corridor across our southern border."

Turkey has long viewed the Kurdish forces as a terrorist organization and has pushed for the creation of a "safe zone" along the border between Turkey and Syria in an effort to return over 1 million Syrian refugees to the region.

Erdoğan said on Twitter, "Operation Peace Spring will neutralize terror threats against Turkey and lead to the establishment of a safe zone, facilitating the return of Syrian refugees to their homes."

Turkey's military operation comes just days after President Trump announced U.S. forces are withdrawing from posts in northern Syria, leaving U.S.-backed Kurdish fighters along the Syria border to fend for themselves against any Turkish assault, despite having been the U.S.' most reliable partner in fighting ISIS in that corner of Syria.

President Trump's decision caught backlash, and in response, he threatened to punish Turkey economically if it does "anything outside of what we think is humane."

A source at the Syrian Foreign and Expatriates Ministry said in a statement to Syrian state news agency SANA, "The aggressive behavior of the Erdoğan regime clearly shows the Turkish expansionist ambitions in the territory of the Syrian Arab Republic and cannot be justified under any pretext."