Turkey, Iran and Russia Fail To Agree On Syrian Ceasefire 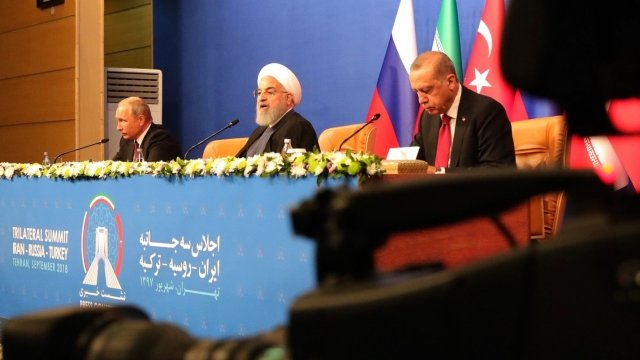 By Jake Jones
September 7, 2018
Leaders of the three nations met on Friday to discuss the situation in Syria, including a potential military assault on Idlib.
SHOW TRANSCRIPT

Leaders of Iran, Russia and Turkey failed to reach a ceasefire agreement for the last rebel stronghold in Syria, only coming to a consensus that the yearslong civil war must be ended with a political solution, not a military one.

Turkish President Recep Tayyip Erdoğan had called for a ceasefire at a meeting in Tehran on Friday, the same day airstrikes by Russian and Syrian government planes targeted southern Idlib – one of the last holdout regions opposed to Syrian President Bashar al-Assad.

Erdoğan fears an all-out assault on Idlib, which is home to at least 2.3 million people, would lead to a massive influx of refugees. Turkey already houses more than 3 million Syrian refugees and Erdoğan says the country can't handle any more.

But Iranian President Hassan Rouhani and Russian President Vladimir Putin Putin rejected a ceasefire. Both countries are allies to Assad, and say there are "terrorist" groups in the region that need to be dealt with. Turkey supports some rebel groups.

Putin also said they couldn't negotiate a ceasefire if rebel groups in the region weren't a part of it.

The United Nations and several other groups have also warned a military offensive on Idlib would result in a humanitarian disaster. The U.S. believes Assad's forces are preparing to use chemical weapons on Idlib, and U.S. Ambassador to the U.N. Nikki Haley warned consequences of an assault on Idlib would be "dire."