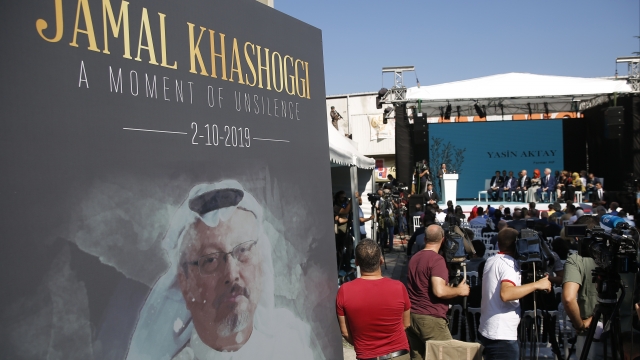 SMS
Turkey Holds Trial In Absentia For Suspects In Khashoggi's Death
By Bailey Vogt
By Bailey Vogt
July 3, 2020
The suspects — which includes two of the Saudi crown prince former aides — were all absent as Saudi Arabia refused to extradite the suspects.
SHOW TRANSCRIPT

The suspects — which includes two of Saudi Crown Prince Mohammed bin Salman's former aides — were all absent as Saudi Arabia refused to extradite the suspects.

Khashoggi was last seen in 2018 walking into a Saudi consulate in Turkey to pick up marriage documents. He never walked out, and the whereabouts of his remains are still unknown.

Istanbul's chief prosecutor's office announced in March it would charge the Saudi nationals with killing the journalist, as well as the prince's aides with orchestrating a premeditated murder. The Associated Press reported the prosecution is seeking life sentences for the defendants involved in the plot.

Saudi Arabia concluded in its own trial last year that Khashoggi's killing wasn't premeditated and the journalist was killed in a scuffle.

But many have cast doubt on the Saudi crown prince's explanation and called the Saudi trial a "whitewash."