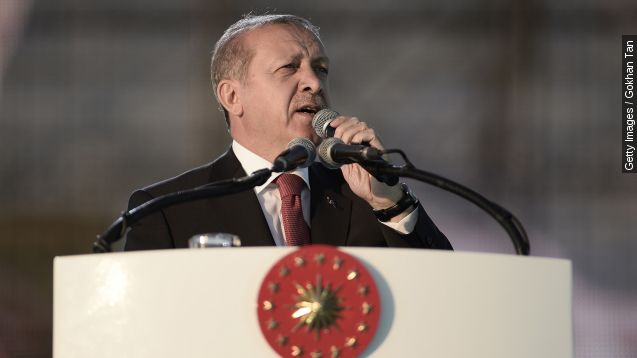 EU officials are hammering out an agreement to help decrease the number of refugee crossing into Europe from Turkey. The EU wants Turkey to increase its border security and to make travel to Europe less appealing by improving conditions for the refugees who aren't sheltered in camps. (Video via NBC)

In exchange, Europe is considering giving Turkey $3.4 million in relief, visa-free travel for Turkish citizens inside the EU, and a chance to revitalize the country's long-stalled bid to join the EU.

According to the UNHCR, Turkey is hosting over 2 million registered refugees. About 600,000 more have made the dangerous journey across the sea to reach Europe this year alone.

Despite the EU's recent change of heart, Erdogan isn't eager to accept more responsibility in the crisis. During a recent speech, he told the crowd, "Someone says, 'We will receive 30,000 to 40,000 refugees,' and then they are nominated for the Nobel. ... We are hosting 2.5 million refugees at the moment. Nobody cares about that."

Human rights groups have also blasted the idea of making the repressive Erdogan administration Europe's gatekeeper. But for EU officials eager to stem the financial and political fallout from the refugee crisis, working with Turkey is an increasingly attractive option.

German Chancellor Angela Merkel, whose response to the crisis has cost her political support, is traveling to Turkey on Sunday to appeal directly to Erdogan for Turkey's assistance.