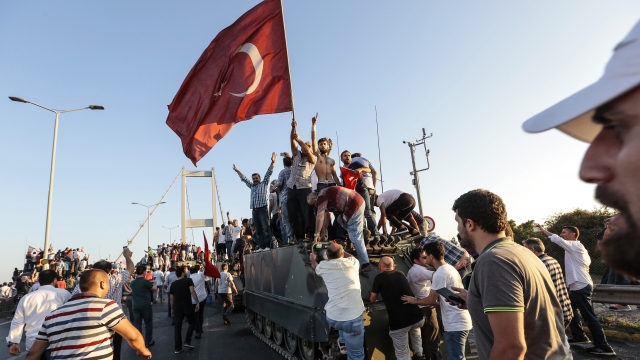 SMS
Turkey Orders Arrest Of 1,100 People Possibly Linked To Failed Coup
By Katie Cammarata
By Katie Cammarata
February 12, 2019
In 2016, a section of the military launched an operation in some large Turkish cities in an attempt to overthrow the government.
SHOW TRANSCRIPT

Turkey has ordered the detainment of over 1,100 people because they're thought to have links to a failed attempted coup in 2016.

Let's dig into this a bit: In July 2016, a faction of the Turkish military launched an operation in some large Turkish cities in an attempt to overthrow the government and President Recep Tayyip Erdogan. There were tanks and soldiers on streets, and explosions in Ankara and Istanbul — Turkey's two largest cities.

Civilians, loyalist soldiers and law enforcement opposed the attempted coup, ending it quickly. Hundreds of people died and thousands more were injured in the process.

After the coup, Turkey declared a state of emergency that lasted for two years. Tens of thousands of people were reportedly dismissed from their jobs or arrested under those emergency measures.

In 2017, almost 500 people accused of plotting to overthrow the government stood trial. At the time, it was described as the country's largest mass trial over the attempted coup.