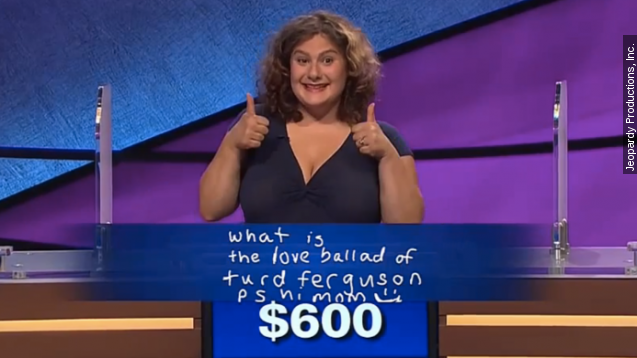 It's a nearly 20-year-old joke-de-Jeopardy we're not tired of — most recently seen on "SNL"'s 40th Anniversary special.

"Burt Reynolds, what are you doing here?" asked Will Ferrell, who played Alex Trebek on the skit.

So meet Talia Lavin — a real Jeopardy contestant who made our comedy dreams come true.

"You came up with this as your response for final, let's see. 'What is the love ballad of "Turd Ferguson." PS: Hi, Mom.' Nope. Sorry," read Alex Trebek.

The question was to name a song from a 1999 animated film about censorship. The answer: Do we even care anymore?

Comedy lovers oozed with appreciation. Mashable called her an "American hero." USA Today said it was "for the win." Lavin even became a top trend on Facebook, alongside the GOP debate and Iggy Azalea's feud with T.I.

Whether she was buzzing in, answering incorrectly or telling what was supposed to be a romantic anecdote, she seemed to smile through her game-show struggle.

A Twitter account registered under her name and attached to her professional website shows us she's still smiling today. From retweeting trolls to giving shout-outs, even saying host Alex Trebek smelled like "a rainbow farted on a unicorn," Lavin is so worthy of an LOL from the World Wide Web.

And while she totally tanked on the show, Lavin told The Huffington Post, "I won the Internet, which is way better than many thousands of dollars."