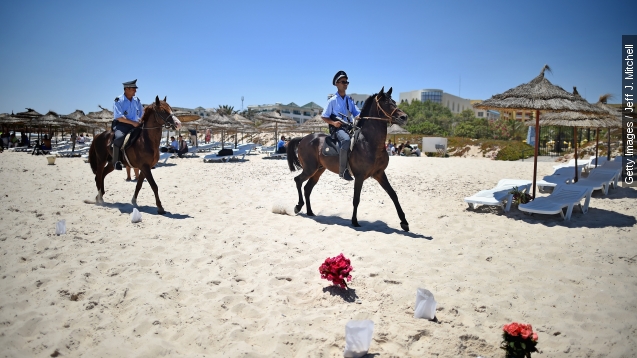 While Tunisian authorities fatally shot the man who killed at least 38 people at a beach resort in Sousse, the investigation is far from over. Now they're looking for anyone who helped him organize the attack. Tunisia's interior minister says they've already arrested a group of suspects associated with the gunman. (Video via El Hiwar El Tunsi)

ISIS has claimed gunman Seifeddine Rezgui as one of its own, and authorities say he likely had accomplices. Nevertheless, Rezgui seems to have flown under the radar of Tunisian intelligence. (Video via Nessma TV)

Of the 38 or more people Rezgui killed, the BBC reports at least 30 of them were from the UK, making it the deadliest single terrorist attack on Britons since the July 7 bombings in 2005. (Video via Télévision Tunisienne 1)

"The authorities in Tunisia have promised to step up security at tourist locations, and sensitive sites, but after two deadly attacks in just three months, many may wonder why this didn't happen sooner," the BBC's Orla Guerin reported.

That other attack she's referring to happened when several gunmen opened fire at the Bardo Museum in the capital Tunis, killing 22 people. (Video via SHEMS FM)

The museum is another popular tourist destination, with most of the victims in that attack reported to be tourists. It shows a trend in these attacks targeting Tunisia's vital tourism industry. (Video via Télévision Tunisienne 1)

So far, Rezgui's parents have reportedly been detained for questioning. Rezgui's father told ITV he was completely unaware of who had influenced his son to commit the attack. (Video via ITV)