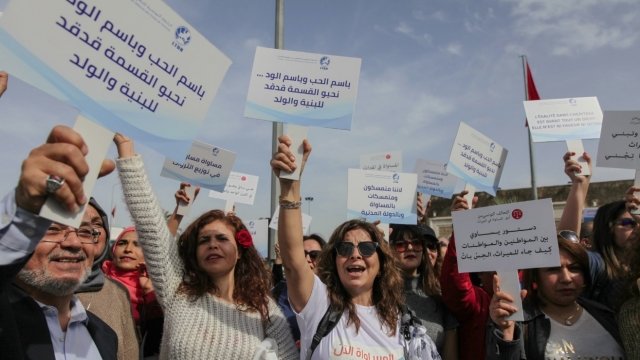 SMS
Tunisia's Push For Women's Rights Now Focuses On Inheritance Laws
By Melissa Prax
By Melissa Prax
August 14, 2018
Currently, women in Tunisia are only entitled to half the inheritance men are.
SHOW TRANSCRIPT

In Tunisia, women only get half of the inheritance men do. But after much debate, that could change. The country's president just announced a bill will be introduced "as soon as possible" to shift the long-standing law.

Thousands of religious conservatives filled the streets leading up to the announcement to protest a government-sponsored gender equality report. The government had been deciding what to do with the inheritance law for about a year. As that decision brewed, there was also a growing body of support. In March, more than 1,000 people in the country's capital protested for equality.

But even if the new inheritance bill becomes law, citizens would still be allowed to choose Islamic rules anyway as a way to ease the transition.

The bill's announcement comes seven years after the Arab Spring shook the region and shifted Tunisia's leadership and constitution. Since then, President Beji Caid Essebsi has pushed to change laws so women have more equal rights.

That has pushed Tunisia to be a leader in women's rights in the region. But in terms of gender parity, the 2017 World Economic Forum's Global Gender Gap Report shows Tunisia ranks 117th out of 144 countries.