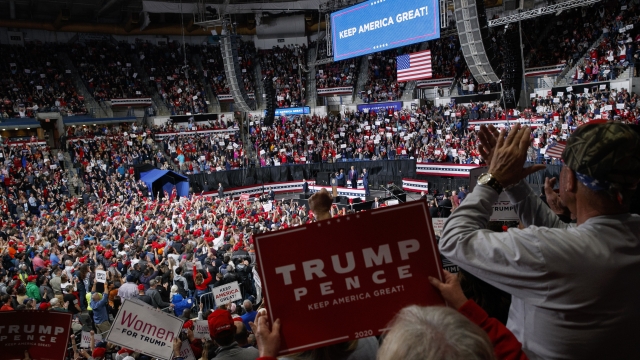 Tulsa, Oklahoma, officials are growing concerned about the spread of COVID-19 as President Trump prepares for a campaign rally in the city.

The president is returning to the campaign trail Saturday with the rally in Tulsa. The event faced a separate controversy after it was set for Juneteenth, the holiday that commemorates the end of slavery in the U.S.

The rally has been rescheduled, but there is still fear about the aftermath of having such a large indoor event.

The rally will be held at Tulsa's BOK Center, which holds around 19,000 people. Because of the coronavirus pandemic, events there have been canceled through the end of July. The CDC says indoor spaces increase the risk of spreading the virus as there is less ventilation and less space to socially distance.

Tulsa County Commissioner Karen Keith says the rally may not only pose a risk for attendees. Keith said, "What about our employees that work in the BOK Center? What's is going to cost to clean it up? There's so many issues on so many levels."

Compared to other states, Oklahoma has seen few confirmed coronavirus cases, with less than 1,600. Tulsa City Health Director Dr. Bruce Dart said, however, the virus is spreading in the city. Dart added he wished the president would postpone the rally until the virus "isn't as large a concern as it is today."

The Trump campaign says it will provide temperature checks, face masks and hand sanitizer to rally attendees, but it's also issued a disclaimer saying it cannot be held responsible for potential exposure to the coronavirus.