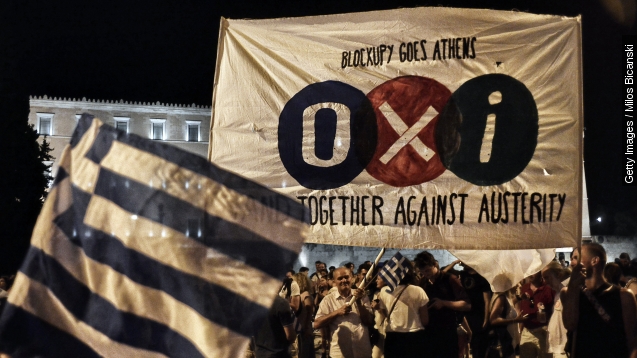 Greek Prime Minister Alexis Tsipras called the results of Sunday's historic referendum a victory of democracy over fear, with Greeks overwhelmingly rejecting the large spending cuts and tax increases demanded by the country's creditors. (Video via Voice of America)

But what exactly is his plan, and do EU leaders on the other side of the negotiating table have any more reason to make concessions now than they did last month?

Tsipras' Syriza party came to power with the promise of staying in the eurozone but renegotiating the terms of the bailout to allow for more growth and less fiscal pain.

So far, the government hasn't been able to fulfill its promise. The debt negotiations fell apart last month. (Video via European Council)

That means the situation now is a classic game of chicken. Tsipras hopes the no vote — and Europe's desire to keep Greece in the euro — will be enough to extract some concessions before the Greek economy goes over a cliff.

Experts don't know which way the showdown will go.

"With this vote, it's very hard to avoid Grexit," Raoul Ruparel of Open Europe said.

"The Greek government is going to have to blink first," Angel Ubide, senior fellow for the Peterson Institute for International Economics said.

The European Central Bank, once frightened that a Greek collapse could cause a ripple effect across Europe, now says it has plans to stem the contagion. But the value of the euro did drop sharply heading into Monday.

Likewise, predictions on Greece's fate if it left the Euro are generally dire, but there are a few economic projections that say the country could actually benefit in the long run.

Eurozone leaders are also likely thinking of their image. Greece leaving the euro would obviously be bad optics, but there are concerns other countries, like Spain with its 22-percent unemployment rate, could revolt if they see Greece getting special treatment. (Video via European Council, ITN)

These are just a few of the factors European leaders will have to consider as they scramble for a response to the referendum. The Eurogroup is set to discuss the vote on Tuesday.