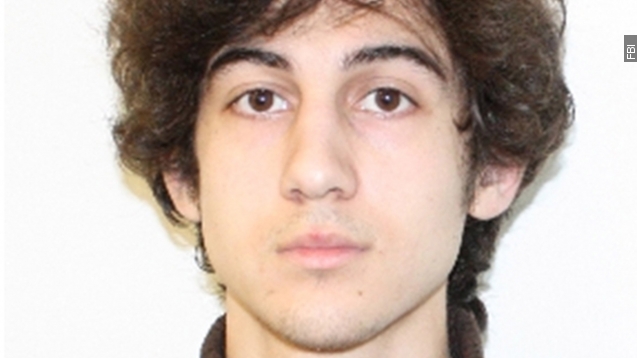 SMS
Tsarnaev Apologizes For 'Irreparable Damage' At Sentencing
By Cliff Judy
By Cliff Judy
June 24, 2015
In a stunning change of demeanor during his sentencing hearing, Dzhokhar Tsarnaev apologized to the people he hurt at the Boston Marathon bombings.
SHOW TRANSCRIPT

A lengthy and emotional sentencing hearing ended, as expected, with Dzhokhar Tsarnaev sentenced to death for the Boston Marathon bombings.

But the big question entering the hearing: Would Tsarnaev himself speak when given the chance? (Video via WHDH)

After the noon recess, Tsarnaev's defense attorneys announced he would. He opened by noting it's the Muslim holy month of Ramadan, a time of forgiveness. Reporters in the courtroom said Tsarnaev choked up as he apologized to his victims.

"I am sorry for the lives that I have taken, for the suffering that I have caused you, for the damage, the irreparable damage," Tsarnaev said.

He then asked Allah for mercy for his victims, himself and his brother Tamerlan, who helped carry out the bombings and later died in a shootout with police. The courtroom apology was a stunning change of demeanor for Tsarnaev.

For more than two years, the victims and family members of the three people who died in the blasts waited for the chance to speak directly to Tsarnaev, who reporters in the courtroom said was relaxed and even smiled at times during his murder trial. (Video via The Boston Globe)

Several of those victims who lost limbs or suffered other injuries showed up for court, with 20 to 30 of them expected to speak. (Video via WHDH)

While some struggled for the words to tell Tsarnaev what he'd done to them or their families, others pleaded for Tsarnaev to finally show remorse and dissuade future terrorists. (Video via CBS)

Krystle Campbell's father told Tsarnaev: "You failed. At least you won't hurt anyone else." Campbell was 29 years old when she died from the first explosion set off at the marathon. (Video via CNN)

The judge's formal sentencing was just that — a formality — after a jury pronounced Tsarnaev guilty and recommended the death penalty in May. (Video via WBZ-TV)

After sentencing, Tsarnaev is expected to join the 62 other federal inmates on death row at the U.S. Penitentiary in Terre Haute, Indiana.