TSA Offers $15,000 For You To Fix Security Checkpoint Lines 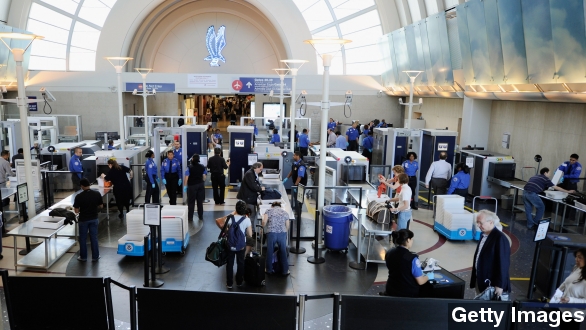 SMS
TSA Offers $15,000 For You To Fix Security Checkpoint Lines

By Erik Shute
July 29, 2014
The Transportation Security Administration is awarding cash prizes to flyers who present the best ideas to speed up their checkpoint queue lines.
SHOW TRANSCRIPT

​The dreaded airport security checkpoint. It looks like a Disney World queue line, but the ride at the end isn't nearly as good. Now its guardians at the TSA are giving the traveling masses a cash incentive to get those lines moving.

"Now the agency is asking for your help, offering rewards of up to $15,000 for the person with the best idea for speeding up those security lines." (Via WCAU)

That 15 grand is actually divided up into a grand prize of at least $5,000 and several $2,500 chunks to the next best ideas. TSA plugged its contest on the public problem-solving site InnoCentive. (Via Getty Images)

The administration hopes the "Next Generation Queue Line" will show a​ "scientific and simulation modeling approach to meet queue design and configuration needs of the dynamic security screening environment." (Via InnoCentive)

Or in other words: keep things moving smoothly. The proposal was easy fodder for the morning shows. NBC's Carson Daly joined in on the action.

"May I suggest this? How about a national travel uniform? Sweats, slippers, no buckles. We all look the same going in, and we get right through security. How about that, guys?"

And the anchors at KPNX had a few ideas too, but they weren't sold on the prize money.

"Maybe if they were not giving away so much money, they would not have to raise those security fees. Think of that. Or maybe ask you out to dinner after the pat-down, right?"

However, the right solution is not as simple or romantic as you think. The TSA stresses participants should consider factors like peak traveling hours, TSA staff schedules, wheelchair access, among other factors — like the lowly economy traveler. (Via Getty Images)

If you have an idea — any idea, really — proposals should be submitted by the Aug. 15 deadline.