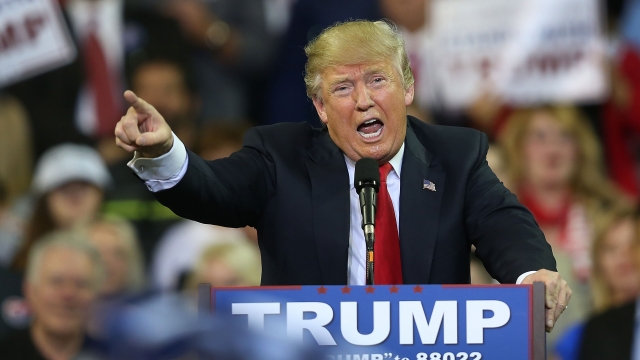 Officials say they don't plan to charge Donald Trump for inciting a riot after a rally in North Carolina turned violent.

Donald Trump will not face charges for inciting a riot after a campaign rally in North Carolina turned violent last week.

Video from the rally appears to show a Trump supporter punching a protester in the face as the protester was being escorted out of the event by private security officers.

An attorney for the Cumberland County Sheriff's Office said it was investigating whether conduct from Trump or his campaign rose to the level of inciting a riot.

But a statement released by the sheriff's office Tuesday said it doesn't plan to file charges against Trump.

"I don't accept responsibility. I do not condone violence, I don't condone what he did, but you know what? Not nice on the other side, either," Trump said on "Meet the Press."

After the incident, Trump said he doesn't support violence. But comments he made in the past suggest otherwise.

"So if you see somebody getting ready to throw a tomato, knock the crap out of 'em, would you? Seriously. ... I promise you, I will pay for the legal fees. I promise," Trump said at a rally in Iowa.

John McGraw, the man accused of punching the protester in North Carolina, is facing charges of assault and battery.

This video includes a clip from Donald J. Trump for President, Inc., and images from Getty Images.