Trump: 'I Wish I Did' Pick A Different Attorney General 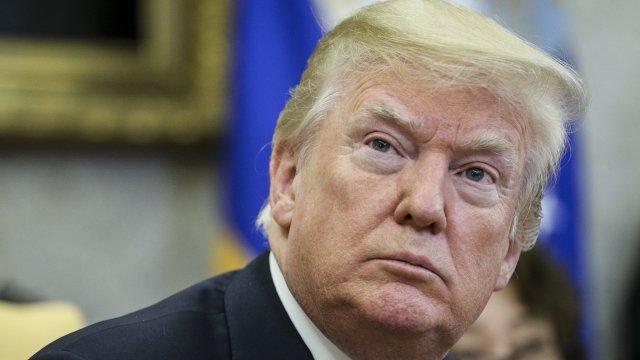 SMS
Trump: 'I Wish I Did' Pick A Different Attorney General
By Ethan Weston
By Ethan Weston
May 30, 2018
President Trump has criticized Jeff Sessions a number of times over the attorney general's decision to recuse himself from the Russia investigation.
SHOW TRANSCRIPT

In a series of tweets, President Donald Trump said he wishes he had chosen someone other than Jeff Sessions to be his attorney general.

Trump made the comments following an appearance by Rep. Trey Gowdy on CBS Wednesday. The South Carolina Republican said the president had a lot of lawyers to choose from and "could have picked somebody else" for the job. Trump tweeted, "I wish I did!"

Gowdy was responding to a question about a New York Times report from Tuesday.

That report said Sessions and Trump met in March 2017 to talk about the travel ban. Except Trump reportedly focused on Sessions' decision to recuse himself from the Russia investigation. According to the outlet, Trump asked Sessions to reverse his recusal.

The president has criticized Sessions a number of times since he removed himself from the investigation.

Gowdy told CBS he thinks Sessions should have told Trump why he'd recuse himself before taking the job, and that the president wasn't trying to obstruct justice by asking Sessions to reverse his decision. Instead he was "expressing frustration" with the attorney general's decision.