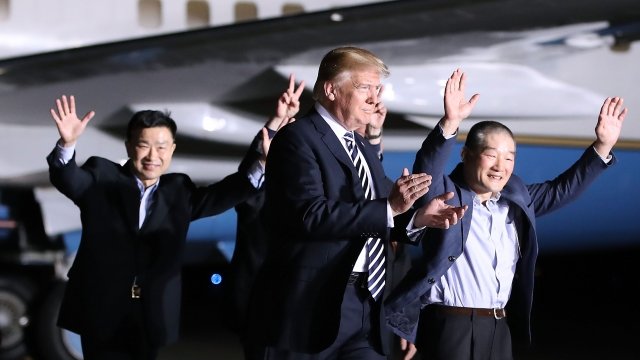 Three American citizens who were freed from North Korea were taken to a Maryland hospital for evaluation and treatment early Thursday after being personally greeted by President Donald Trump.

The three men were the last known U.S. hostages imprisoned in the country. They were released Wednesday while Secretary of State Mike Pompeo was in North Korea to finalize details for an expected sit-down between Trump and North Korean leader Kim Jong-un.

Trump and his wife, Melania, greeted the men when their plane landed at Joint Base Andrews in Maryland shortly before 3 a.m. EST Thursday.

Speaking to reporters, the president said it was "nice" of Kim to release the three men before the two leaders met face-to-face.

"We're starting off on a new footing. This is a wonderful thing that he released the folks early," Trump said. "My proudest achievement will be — this is a part of it — will be when we denuclearize that entire peninsula."

As he stood with the freed men, Trump also said he wanted to pay his "warmest respects" to the parents of Otto Warmbier. Warmbier was a U.S. student who died soon after being released by North Korea last year. His parents are suing North Korea over his death.

An official told CNN that all three men will be heading home to their families after they debrief intelligence officials.