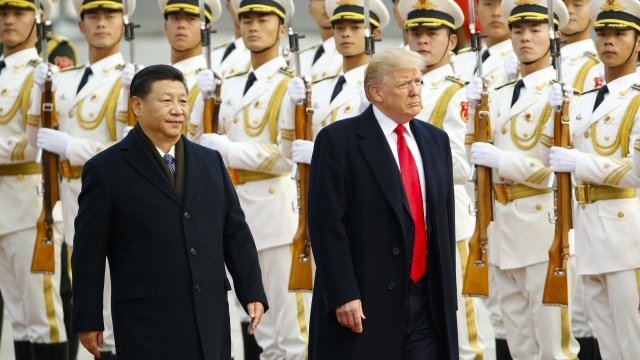 SMS
Trump Warns It's Likely He'll Boost Tariffs On Chinese Goods
By Katherine Biek
By Katherine Biek
November 27, 2018
The U.S. and China have already imposed billions of dollars in tariffs on each other's goods this year.
SHOW TRANSCRIPT

It doesn't sound as if the tit-for-tat trade battle between the U.S. and China is winding down.

President Trump told the Wall Street Journal that it's "highly unlikely" he will hold off on boosting tariffs currently placed on $200 billion of Chinese goods from 10 percent to 25 percent on Jan. 1.

The ongoing trade war between the two countries has so far resulted in the U.S. taxing $250 billion worth of Chinese imports. Meanwhile, China's placed tariffs on $110 billion of American goods — but it doesn't import nearly as many products from the U.S.

The president's comments come just days before he's set to meet with Chinese President Xi Jinping at the G20 summit in Argentina.

If the two leaders are unsuccessful at brokering some sort of a trade deal, President Trump said he's ready to implement tariffs on an additional $267 billion in Chinese imports.

If those new tariffs were to go into effect, President Trump warned Apple iPhones and laptops imported from China could be hit.

The tech giant didn't respond to the Wall Street Journal's request for comment, but it previously said the escalating trade battle could result in Apple having to increase prices on some products.