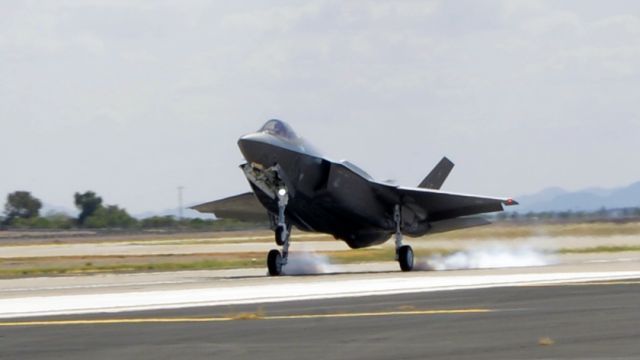 Lockheed Martin's F-35 planes are touted as the most advanced weapons system in the world. They're also the poster child for out-of-control defense spending.

Donald Trump told the press, "We're trying to get costs down, costs. Primarily the F-35."

And the president-elect says he has a solution — ask Boeing to build a comparable F/A-18 Super Hornet fighter instead.

It's true the Boeing jets are significantly cheaper; Canada opted for Super Hornets after balking at the F-35's price tag. But asking the Super Hornets to do everything the F-35 does is asking a lot.

First and foremost, the F-35 is a stealth fighter, shaped to be nearly invisible to radar. The F/A-18 is not and would need a full-body redesign to have a shot at becoming one.

Foxtrot Alpha previously reported on a prototype F/A-18 with a stealth body, but apparently it never got off the ground.

The F/A-18 also doesn't have the vertical takeoff and landing capability that some variants of the F-35 boasts. It'd take another major, expensive design overhaul to preserve that feature.

SEE MORE: The Pentagon's Weapons Tester Is Concerned About The F-35 Fighter Jet

Plus, the F-35 has some state-of-the-art systems, like a cognitive electronic warfare system designed to foil digital radars, that would also add to the price of a "comparable" Super Hornet.