Trump Visits Louisiana Ahead Of Obama 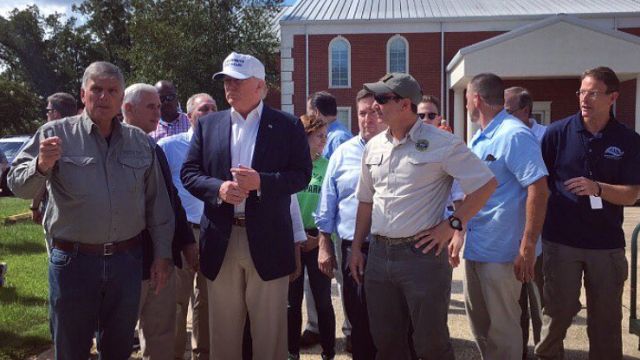 SMS
Trump Visits Louisiana Ahead Of Obama
By Matt Picht
By Matt Picht
August 19, 2016
Donald Trump visited the flooded regions of Louisiana Friday, and he blasted the president for not doing the same.
SHOW TRANSCRIPT

Donald Trump toured the flood-stricken regions of Louisiana on Friday. He spoke to those affected by the disaster and helped hand out relief supplies.

The GOP candidate and his running mate, Gov. Mike Pence, received a warm welcome in the solidly red state. One supporter told the Los Angeles Times, "When he looked me in the eye and shook my hand, it felt real. The guy is down here for more than just a vote."

Floodwaters caused by torrential downpours have killed at least 13 people and damaged more than 40,000 homes so far, and the flooding is ongoing. President Barack Obama declared the state was undergoing a major disaster Sunday, freeing up federal emergency funds. Administration officials like Homeland Security Secretary Jeh Johnson have visited the region.

But Obama, who's currently vacationing on Martha's Vineyard, has yet to visit the stricken state despite calls from local media to cut his vacation short. Trump blasted the president's absence Friday, claiming Obama is "trying to get out of a golf game."

The White House said Friday that Obama plans to travel to Baton Rouge on Tuesday. Press Secretary Josh Earnest said Obama's trip was planned to avoid interfering with the work of first responders — something Louisiana's Democratic Governor John Bel Edwards has urged before.

Bel Edwards told MSNBC, "We have to take hundreds of local first responders — police officers, sheriffs, deputies and state troopers — to provide security for that type of visit. I would just as soon have those people engaged in the response rather than trying to secure the president."