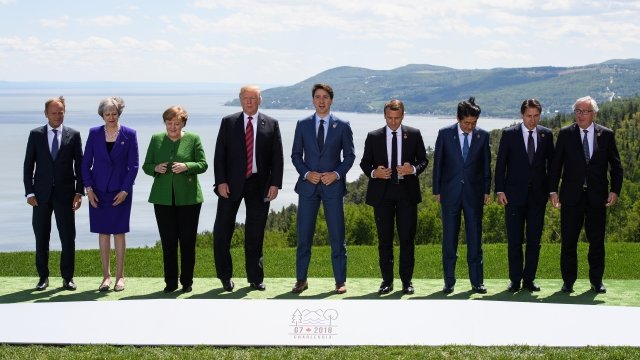 SMS
Hopes For Unified G7 Statement Seemingly Dashed After Trump Tweet
By Ethan Weston
By Ethan Weston
June 10, 2018
President Trump said he decided not to endorse the statement after Justin Trudeau made what he called "false statements" at a news conference.
SHOW TRANSCRIPT

G7 leaders were hoping for a summit that presented international unity on a number of global issues. But that hope was seemingly dashed Saturday evening.

After leaving the summit, President Donald Trump tweeted that he'd instructed U.S. officials not to endorse a joint statement with the other six member nations. Trump had backed the statement just hours before.

The president said his decision came after Canadian Prime Minister Justin Trudeau made "false statements" at a news conference held after Trump left the summit. He didn't say which statements he considered false.

Trump and Trudeau have been sparring over trade in recent days after the U.S. imposed tariffs on steel and aluminum from Canada and the EU. Trudeau says Canada will respond to those tariffs by imposing its own, which will go into effect July 1.

And EU leaders at the summit also reportedly told Trump they had no choice but to impose their own tariffs against the U.S.

Trump reportedly floated the idea of dropping import barriers altogether but also warned the U.S. could cut off trade entirely with countries that didn't agree to certain rule changes. Trump said it was time for the U.S. to stop being the "piggy bank that everybody is robbing."